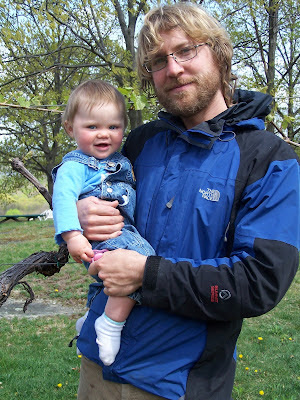 Benmarl makes one of my favorite wines - a Reserve Baco Noir which is turning heads and is a scarce commodity because it sells out every year. Here's an interview with one of the best young winemakers today.

I do not know Kristop Brown well. But I know of him. He is young, but well educated, and hungry for more knowledge.

Kristop Brown has rock star good looks, a soft spoken voice, and confident but unobtrusive personality, and a great way with people. Oh yeah, and he makes great wine. The current heart throb of Hudson Valley winemaking, it is easy to see why people are drawn to the quiet but charismatic winemaker from Benmarl. He certainly mirrors the zen of the current age, Brown seems to evince a love and enthusiasm for wine and winemaking, but also seems to possess a sense of self, not taking himself too seriously.

“I worked at Millbrook Winery for one year,” said Brown. “I became interested in wine at Millbrook where I was able to taste wine from Millbrook as well as the other estates owned by John Dyson in Tuscany and the Russian River Valley. This opened my eyes to the world of wine.”

“I went to Rutgers University and studied forestry,” he said, admitting that wine was not yet a trade he had at first considered seriously.

“I've been at Benmarl since the [first week] in January 2004,” says Brown. “I learned to make wine apprenticing under Eric Miller, former winemaker at Benmarl [and son of owner Mark Miller], and owner and winemaker at Chaddsford winery (Pennsylvania). I took Organic chem. I and II at SUNY Ulster to help me understand wine better.” He added, “I am also in school part time with the goal of getting a degree in Chemistry.” 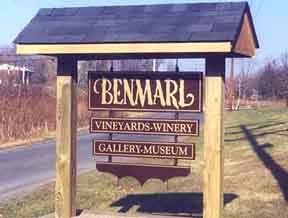 Benmarl is known for its Baco Noir, and in recent years Brown has helped raise the hybrid from a local favorite to a wine other winemakers are talking about. Many other wineries had pulled their Baco Noir vines, not able to make a go of it with the somewhat obscure hybrid. But Brown’s newest incarnation of this grape reminds one of a fine Rhone or a Washington state red. It’s big, fruity, but dry and elegant. And the new package and label have helped make the transformation complete. This wine is a true treasure.

I asked Kristop about the vines at Benmarl. “The average age of a Baco vine on the property is 25 years old with the oldest at 50 years. These older vines give great character and low yields. Also Baco should be planted in steep rocky soils overlooking a body of water, which is exactly us. Aging in a mixture of new and used French oak is an essential part of Benmarl's Baco program. We age Baco for at most 8 months. I feel the youthful fruit of Baco shows best and should be consumed in the first 1-5 years of its life. Lastly the high acidity must be dealt with and this to me is the biggest challenge in making the wine. Blending a small amount of low acid wine like Foch works, de-acidifying may work (but sometimes leaves a "hole" in the wine), and leaving a dash of residual sugar are all techniques I have used.”

“90% of the producing vines are Baco with the rest split between Marchel Foch, Leon Millot, Noiret and there is a dash of Chambourcin, Aurora, and Villard Noir…We are currently cultivating young Traminette vines on the property and making plans for restoring much of the overgrown terracing to replant. This of course will take many years to complete. ”

I asked him if he enjoyed making Baco Noir. “I do enjoy making Baco the most because I am starting to know the variety a little better having worked with it for four and a half vintages. I am able to tend the vines and make the wine which I think allows for maximum control of the outcome. I also enjoy making crisp whites with slow, cool fermentations like Traminette and Riesling. The intensity of aromatic fruit that is created is intoxicating.”

What is his favorite part of the process? “My favorite part of winemaking believe it or not is working in the vineyard. This is where the wine is made. I finally understand the French philosophy on the vigneron which means "winegrower.” 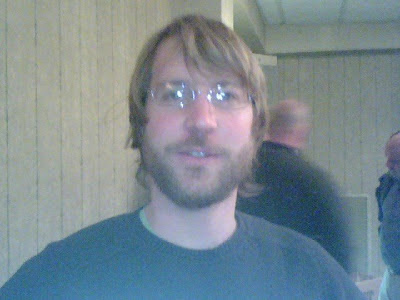 The more you know Mr. Brown, the more you want to know. He was originally born in Sharon, Connecticut, in June of 1975. He is married to Jade, and they have an 11-month-old baby, Ruby. "I used to fly fish and go camping with Jade before the baby, but would like to return to it when Ruby is older. I also have two cats (Stanlely and Stella)."

Did he want to be a winemaker when he was younger? Hardly. “I don't think I ever really thought about that when I was little. Maybe a professional fisherman or something.”

I asked him to name a few of his favorite East Coast wines, but this is a truncated list, including Dr. Franks Rkatsitelli, Millbrook Tocai Friulano, Whitecliff's Awosting White, Bedell Cellars’ Taste Red, Glenora's Cabernet Franc.

Asked what wine region he would most like to visit, he replied, “I would like to visit the Loire Valley to see how they produce Cabernet Franc, which I feel might make a good vinifera varietal for our property.”

I told you he was serious.
Posted by Carlo De Vito at 7:14 PM