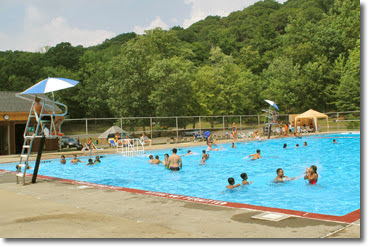 “At 832 feet, it is the highest peak in the county. Although much of the mountain is in High Tor State Park, a 53-acre tract on the south face had been farmed from 1950 through 1989,” wrote New York Times writer Jerry Cheslow

“In 1992, a developer bought the property and received preliminary approval for the construction of 20 homes. A local group named West Branch Conservation Association, which sought to preserve the mountain in its undeveloped state, sued the builder and Clarkstown to prevent the construction. Last September, after a judge ruled that the builder did not provide a proper environmental impact statement, he decided to sell the site,” Cheslow continued.

"The builder knew that the fight would go on for years and so he just gave up," explained Zipporah S. Fleisher, a member of West Branch.

According to Cheslow in 1995, “The property was purchased for an undisclosed sum by Scenic Hudson Land Trust Inc., a Poughkeepsie-based conservation group that intends to keep the site as a nature reserve.”

High Tor holds a fascination for those who live in the Hudson Valley. A large slice of rock that juts up out of the hills of the Hudson River. The mountain so fascinated Maxwell Anderson that he wrote a play, produced on Broadway in 1937 “High Tor.”

The property was most famous from 1950 to 1989 when it was planted with grapes and became known as High Tor Vineyards. The land of High Tor was granted to the Van Orden family by King George III. Grapes had been growing on the property dating back to the 18th century. There was also supposedly a Indian burial ground located somewhere on the property.

Everett Summer Crosby,” who was also a writer, bought the High Tor site with its historic Van Orden House in 1950 to prove that he could produce quality grapes and wines just 20 miles north of the George Washington Bridge. His products stood the test as he marketed as much of his Rockland White, Rockland Red and Rockland Rose as he could produce,” reported the New York Times.

According to American wine historian Leon Adams, High Tor was “for a quarter of a century was the most famous small winegrowing estate in eastern America.” High praise indeed coming from Adams.

He was a mentor to many, including a young fledling vintner named Mark Miller, who founded Benmarl. "I visited Everett regularly and he was unfailingly cooperative and encouraging, making all of his considerable experience freely available to me." He referred to Crosby's wines as "attractive, the whites in particular were fresh and delicious...his reds wines...represented an enormous breakthrough." Miller said they were by far the best on the east coast. Miller placed Crosby in perspective: "The precedent set by Crosby represents an important period in the viticultural history of the Hudson Valley." His reds were made from hybrids, according to wine expert of the periodWilliam E. Massie.

“A native of Alameda, Calif., he graduated from the University of Southern California, where he studied music and writing. He spent 12 years in New York City, as head of the English section of the Voice of America in World War II, and writing radio scripts.”

He lived with his wife Alma for more than 60 years. He sold the vineyard in the early 1970's and published "The Vintage Years: The Saga of High Tor Vineyards." According to Adams the book was “delightful.” In the book he “related his trials and successes in planting his dream vineyard on that craggy mountain and eventually winning connoisseur acceptance of his French hybrid wines.” He sold the vineyards to a New York restaurateur who kept it open for five more years. In 1981 New York economist Christopher Wells bought the property and revived the vineyards, but eventually sold it.

Crosby died on January 12, 1994 at Memorial Hospital in Ormond Beach, Florida. A former resident of West Nyack, N.Y., and Ocho Rios, Jamaica, he was 82 and had lived in Ormond Beach since 1989. Today High Tor remains as a state park. It’s a beautiful place to visit, with swimming pools and hiking trails. But the wine is gone.
Posted by Carlo De Vito at 5:56 PM