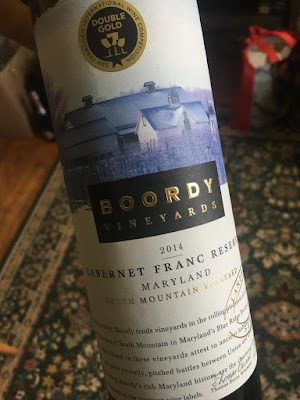 I bought these two bottles of Boordy Vineyards wine at the Drink Local Wine/Taste Camp in Maryland in 2017. It seems like a life time ago but I do remember it incredibly fondly. These wines are both from the Landmark Series, which is the winery's premiere expression of their terroir and the winemaking art, as well as about land stewardship.

Boordy founder Philip Wagner made his name and reputation growing Baco Noir, but Rob Deford steered the company in a new direction with the turn of the century. It turns out it was an impressive move. Rob and his family and their operation have been a leader in the Mid-Atlantic wine scene for many years. This was a big step. He turned Boordy into one of the most serious wine producers in the region. And indeed, they are a regional powerhouse.

According to Boordy, Tom Burns is the head winemaker. He spent 20 years managing our vineyards in addition to making our wines, so the critical connection between the vineyard and winery is in his DNA. In 2011 Tom was joined by José Real, whose analytical skills were honed working in his family’s wine laboratory in Jerez, Spain. Steve Blais, from the consulting firm of Michele Rolland in Bordeaux, provides a global perspective on their work. Son Phineas, Rob and Julie manage the winery. This team is strong and deep.

Boordy South Mountain Vineyard Cabernet Franc 2014 was harvested Between October 14 and the 21st of 2014. The wine is 75% Cabernet Franc, 7% Merlot, 6% Petit Verdot, 6% Syrah, and 6% Cabernet Sauvignon. It was aged 16 months in new Freanch oak (45%) and older oak (55%). They produced 575 cases. This was an impressive wine, which led with a lot of dark and medium ripe cherry, hints of red raspberry, and plum, with notes of graphite and vanilla. The fruit was strong on the first sip, but the mid palate was smooth and silky, with a lasting flavor. This was an impressive, impressive wine! 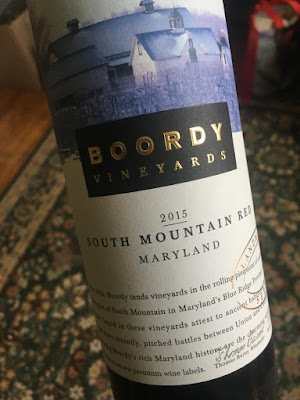 Next was the Boordy South Mountain Red 2015 is a Bordeaux/Meritage-style blend of 60% Merlot, 13% Cabernet Franc, 12% Syrah, and 6% Cabernet Sauvignon. It's 100% Maryland grown and was harvest between October 18-29, 2015. The wine starts of with a love stew of red fruit, including ripe cherry, fresh raspberry, cassis, and plum. The front is all fruit, but the middle swirls with notes of cedar, leather, and undeniable earthiness and bramble, with hints of spice. The come the ample tannins. And a lovely finish of red fruit that lingers. A supple, complex, and well balanced wine. Each sip is an opportunity to continue to explore its many intricacies. Wonderful. Easily could have laid down another 5 years. Ashamed I opened it so soon. Sad I don't have another bottle!

The Landmark Series has been a significant success and is testament to Deford, his team, and their commitment to serious, quality wine...and to their leadership in the Mid-Atlantic region.