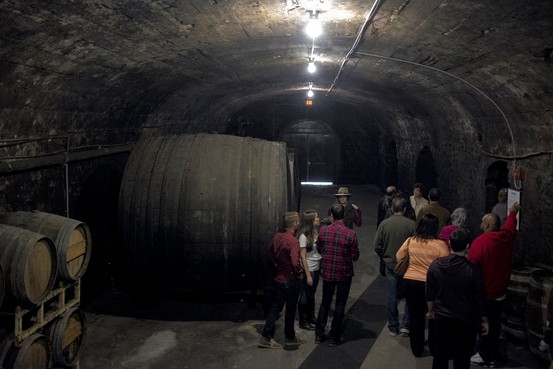 Visitors tour the underground cellar of the Brotherhood Winery. Mark Abramson for The Wall Street Journal
Beringer Vineyards in California bills itself as “the oldest continuously operating winery in the Napa Valley” and is arguably more famous than Brotherhood Winery in Orange County, N.Y. But Brotherhood, founded almost 40 years before Beringer, has the edge. It’s the self-proclaimed “oldest continuously producing winery” in the U.S.
And yet I’d never heard of Brotherhood Winery until just a few weeks ago when I received an email announcing it was the winery’s 175th anniversary. How had so many years gone by without my knowing that Brotherhood even existed, so close at hand?
I decided I needed to make up for lost time—and furthermore, I wanted to see what nearly 200 years of winemaking had wrought—so I invited two friends to join me on a journey to Washingtonville, N.Y.
The drive to Brotherhood, about an hour northwest of Manhattan, was decidedly picturesque—rolling hills, grazing cows and scenic overlooks. But the picturesque views ended rather abruptly at the Brotherhood Plaza’s CVS Pharmacy, and the entrance to the Brotherhood Winery, which featured an industrial building and a large parking lot. The former, I later learned from a tour guide, had been vineyard land. 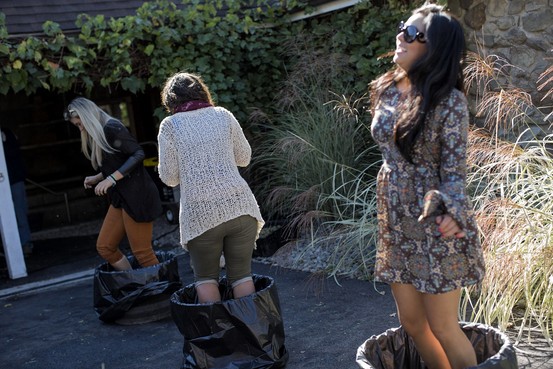 Visitors to Brotherhood Winery stomp grapes as part of a contest. Mark Abramson for The Wall Street Journal
The only Brotherhood vineyard still extant is a tiny parcel of grapes located near the old winery cellar, which the same tour guide explained was either experimental or ornamental. She wasn’t quite sure.
But that fact probably didn’t matter so much to the very large, very young crowd milling around the patio in front of the winery tasting room. There a man was stomping grapes to Gangnam-style music for an enthusiastic audience, some of whom were drinking and some of whom were dancing along.
The age of the crowd was almost as unexpected as the choice of winery tunes. As my friend Kathy observed, “Everyone looks like they’re 18 years old.”
The tasting room, in a beautiful, old-stone building with wide wooden beams, was filled with young people milling about or standing in line with bottles to buy. The selection included not only Brotherhood wines but wines that looked (and sounded) more like soda pop. There was Sweet Lolly, in two colors, and Senor Sangria, made from fruit juices. Suddenly I understood the youthful age of the crowd. (There were also Chilean wines for sale—which might have seemed odd except the current Brotherhood owners are Chilean.)
The large room held three tasting stations where tasters (really drinkers as no one but me was spitting) could choose from flights of Chilean, varietal and traditional wines. And thanks to the winery’s big anniversary, all tasters also received a commemorative wine charm and a glass to keep (we eschewed the glassware).
Brotherhood no longer owns any working vineyards; they make all of their wines from purchased grapes from the Hudson Valley, the Finger Lakes or Long Island, according to our tasting coordinator Janet, who poured us tastes of each wine and made pairing recommendations. She was particularly keen on the dry Riesling from Finger Lakes fruit, which she said paired well with fish. She also like the Pinot Noir with most everything. (The Riesling was the better of the two wines.) 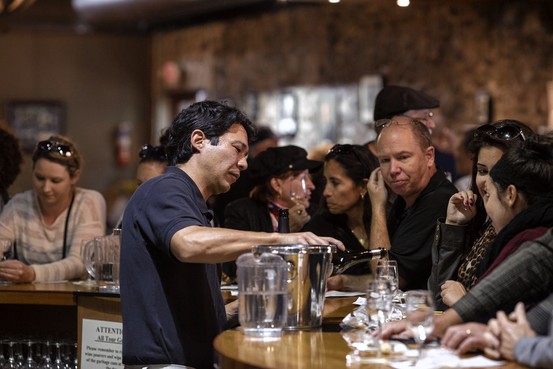 Visitors to Brotherhood Winery taste wine. Mark Abramson for The Wall Street Journal
I liked the traditional wines—the sweet wines like Rosario and May Wine—more if only because they harked back to the winery’s past. For example, the Rosario, a sweet red wine, was created as a church sacramental wine while the pinkish May Wine was the creation of a Brotherhood winemaker from Hungary. It was too sweet to be drinkable but Janet again had some great pairing advice: “It would be great over vanilla ice cream or in a fruit salad,” she said.
The free tour of the old winery was the best part. The view of the bottling line in the industrial building wasn’t exactly exciting but the trip to the old underground cellar (“the largest man-made cellar” in the U.S., said our guide, Susan) was great.
There were plaques on one side of the cellar wall that detailed the history of the winery and its owners (there were several) as well as the derivation of the name (Brotherhood comes from a religious society’s name), according to one of the plaques. On the other side there were wonderfully colorful copies of old wine labels of Brotherhood Chablis and Sauternes. My favorite was the New York Burgundy label complete with a picture of the Chrysler and Empire State buildings. The Brotherhood Winery certainly employed some talented artists back in the day.
But what of the vineyards? I asked Philip Dunsmore. the winery’s vice president of marketing and sales, who appeared at the end of the tour. Mr. Dunsmore had moved to Orange County from Maule, Chile, four years ago. It seemed so sad that Brotherhood—at 175 years of age—had no working vineyards at all.
The owners had been looking for vineyards to buy on Long Island and now they were developing a vineyard in the Finger Lakes, according to Mr. Dunsmore.
That was some good news but didn’t make up for the fact that previous owners of the Washingtonville winery had turned a patch of paradise into a parking lot.
Read more at:
http://online.wsj.com/articles/new-york-winery-celebrates-its-first-175-years-1412902560
Posted by Carlo De Vito at 3:42 AM