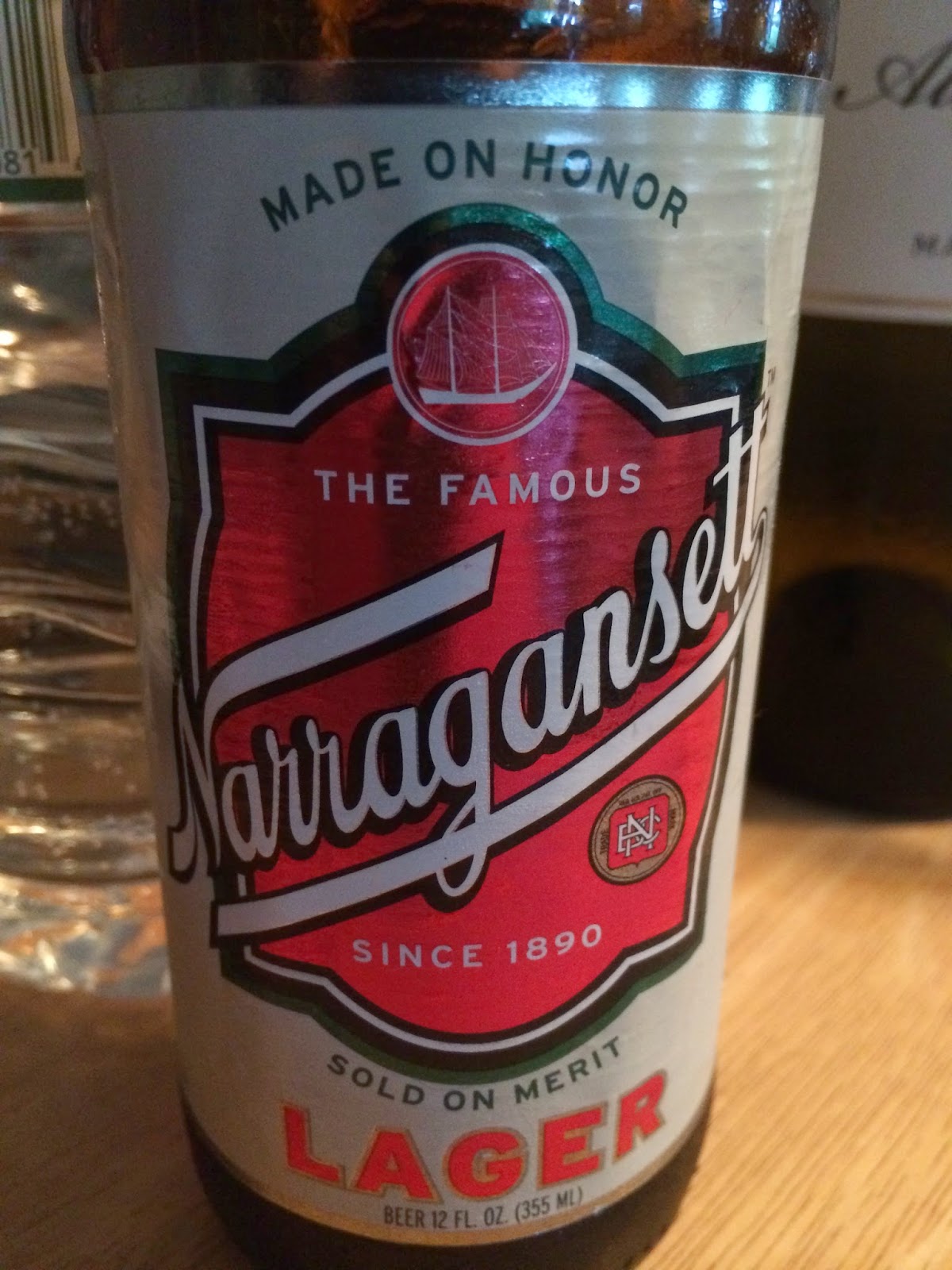 According to Wikipedia: The Narragansett Brewing Company is a brewery. It was founded in Cranston, Rhode Island, USA, in 1890. It was closed on July 31, 1981, and then re-established in 2005. Formerly the number one selling brand in New England, Narragansett now occupies a relatively narrow segment of the market. Originally brewed in the city of Cranston, it was famous for its drinkability and the advertising slogan, "Hi, Neighbor, have a 'Gansett!," most famously uttered by Boston Red Sox announcer Curt Gowdy.

Naragansett sponsored Boston Red Sox and Braves baseball broadcasts through much of the first half of the 20th century. The Braves switched sponsors to P. Ballantine & Sons in 1950, while the Sox stayed with Narragansett. For years, announcers such as Jim Britt, Curt Gowdy and Kevin Baker touted the "straight from the barrel taste" of 'Gansett, brewed with "seedless hops." In the late 1960s, Narragansett was replaced by F& M Schaeffer Brewing as sponsor of Red Sox Baseball, which was followed by a decline in its popularity.

During the 1940's Theodor Geisel better known as Dr. Seuss was hired by the Narragansett Brewing Company to create advertising pieces for the company. It was at this time that the Chief Gansett character came to be, soon after becoming an iconic figure of the brand. The brand was bought in 2005 by a team of local Rhode Island investors led by former juice executive Mark D. Hellendrung, who announced plans to expand its market share and reinvigorate the Narragansett brand identity. Since the purchase, the brand has indeed been revitalized with the help of former brewer Bill Anderson, and some sharp new packaging.

Narragansett beer, now contract brewed by Genesee Brewing Company, has been available again throughout Southern New England since spring of 2006. The lager and light beers are brewed at their brewery in Rochester, New York, while the bock and porter are craft-brewed in Providence, Rhode Island and Pawcatuck, Connecticut. OK, that's a lot of exposition, but I spent a lot of time in my youth growing up in New England, and I remember seeing the old bottles, advertising, serving trays, etc. It's a brand that was synonymous with summer in New England. And of course, it was the beer Quint drank in Jaws...

which the new company has quickly capitalized on...

And I'll be even more honest. Jaws brings back a lot of memories for me when I watch it. It was my youth, in many ways, though I never lived on an island nor sailed as a sailor. But the images, the clothing, cars, and everything else bring me right back to the summers of my youth. That, and Jaws is a great movie. Easily one of my top ten, desert island films.

So when I saw a six pack of bottle of Narragansett I had to have one. It's a solid beer. Very drinkable. It's a brand as old as Yuengling. Always glad to see old regional brands revived. Always fun. The beer was fun and drinkable. Good for a hot summer day. A mild large beer with a slightly sweet finish.

Hard for me to distinguish whether I enjoyed the experience more than the beer. Regardless, as the summer progresses, and I need my quota of solid, easy drinking stuff for friends and guests, to accompany hot dogs and hamburgers, I'll definitely be buying a few more six packs. Every summer, when we have company, I fill up a big aluminum tub with a wide assortment of beers and ice for my guests. The new 'Gansett has absolutely earned it's way into that tub!

Nice to see this old regional brand revived. A little bit of my youth revived. It's going to be a classic summer. Think I'll put on a few dogs, and put Jaws in the DVD. Quint - here I come!
Posted by Carlo De Vito at 4:22 AM