The Master, the Journeyman, Bedell and The New Black Labels 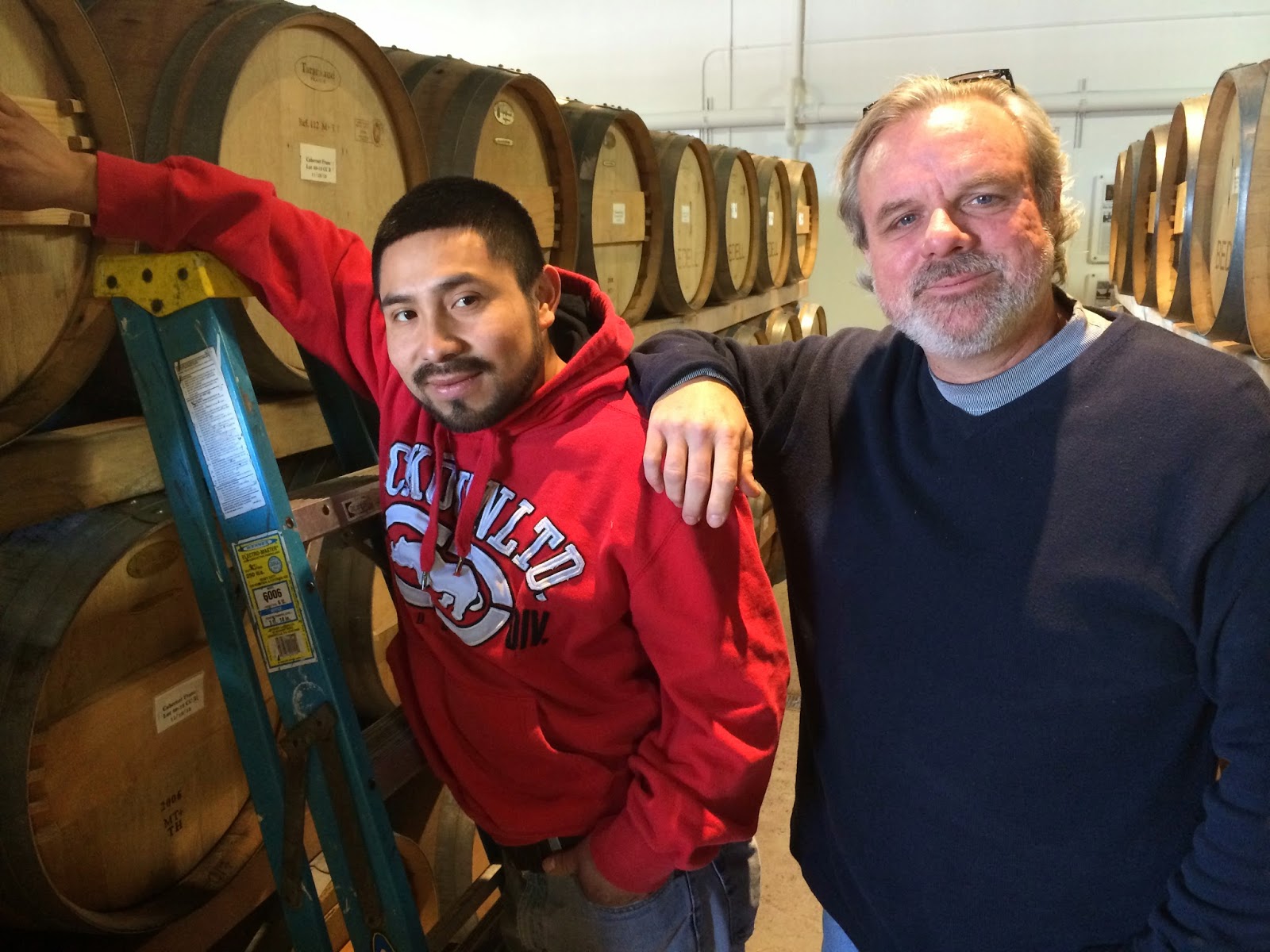 This is a complicated story, so if I make a mistake, or trip along the way, you must forgive me. It is a complicated story because it is about something important. It has a beginning, a middle, with lots of twists and turns, and an ending that is really a beginning. I am no Dickens, nor Thackery, nor Bronte nor Austen, nor Dos Passos. But it is a story of a vintage, of professionalism, of friendship, and about something more important. Too much for this small space, or my meager means as a storyteller. But I feel I must attempt it. 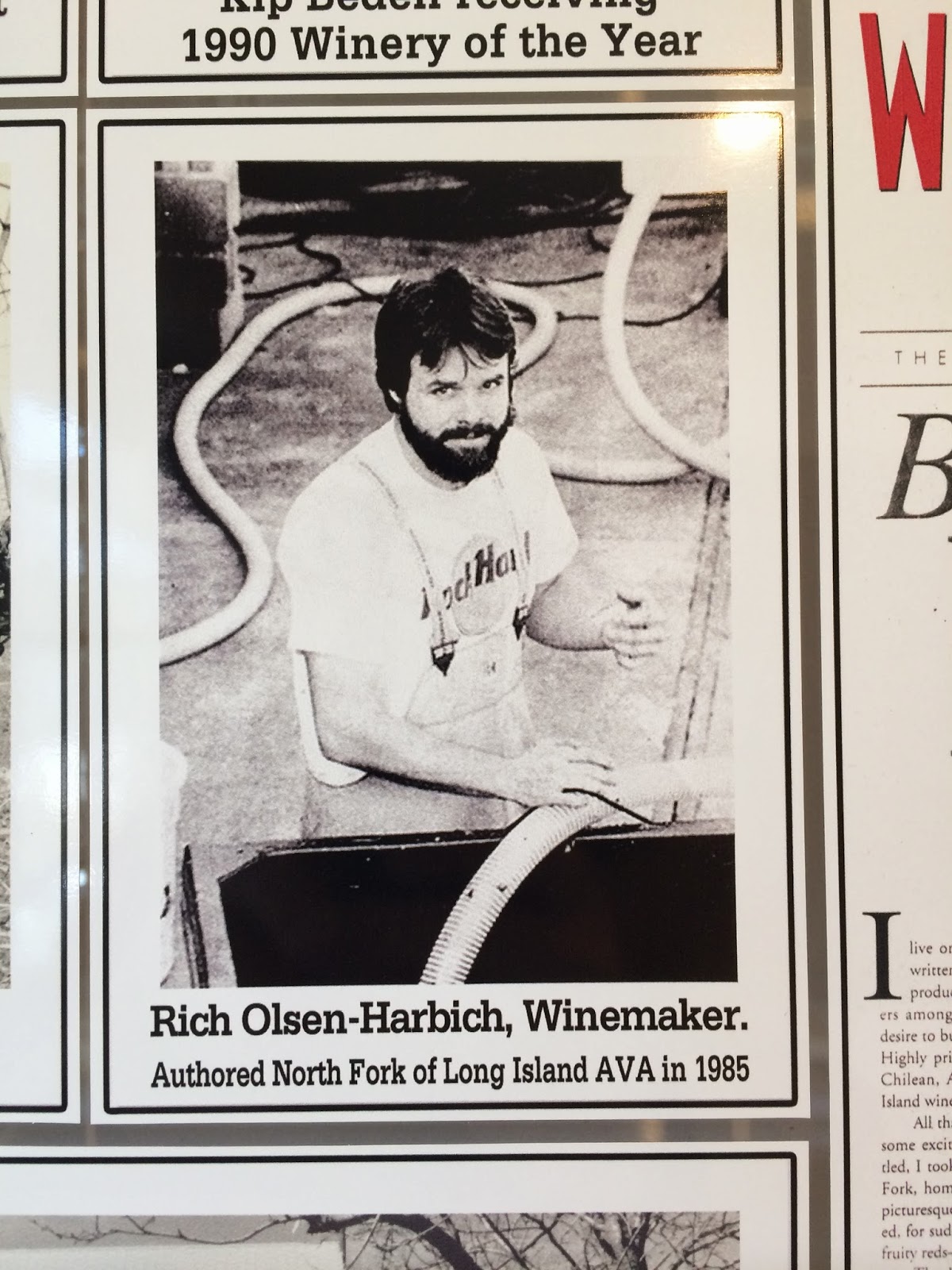 Recently, when I had lunch at Saks 5th Avenue with Lettie Teague of the Wall Street Journal, I found a Bedell Cellars Cab Franc Rose on the label. I mentioned it, and Lettie's eyes widened, and she said, "Rich Olsen-Harbich." And we both smiled and nodded. That's all you really need to know about Rich - he makes great wine. But more importantly, he has spent his entire career in his region. And that's not even the right way to say it...he's made this whole region his life. He has mad, mad memories of his time at the now dissolved Bridgehampton Winery. He authored the North Fork AVA. 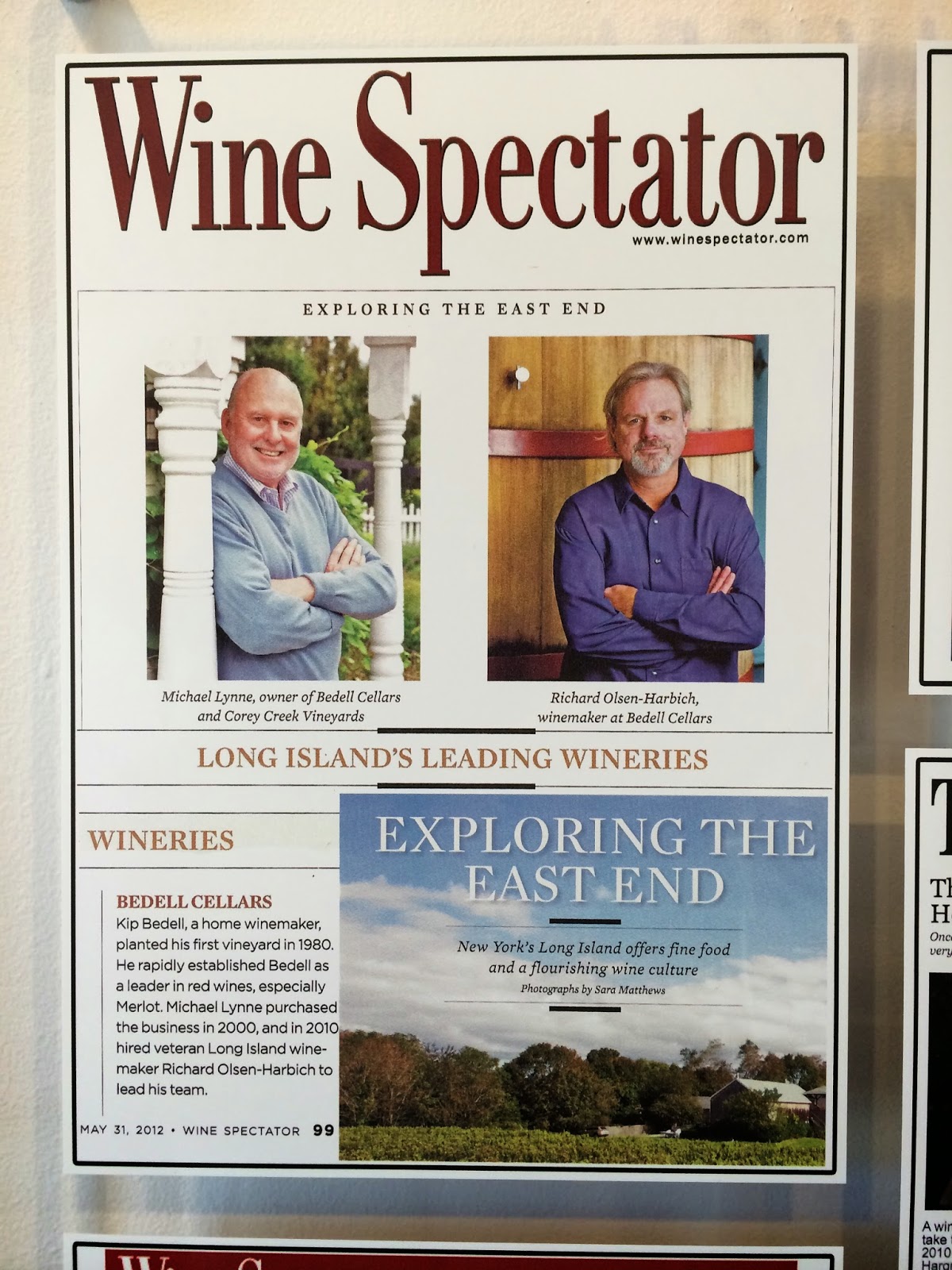 He helped create incredibly memorable wines at Raphael. He helped found (with others) the new Long Island Sustainable Winegrowing. And now he has brought his prodigious talents to Bedell. For many men that would be enough. That is a career. He's been featured in the NY Times, the Wall Street Journal, Wine Spectator, and many other places. 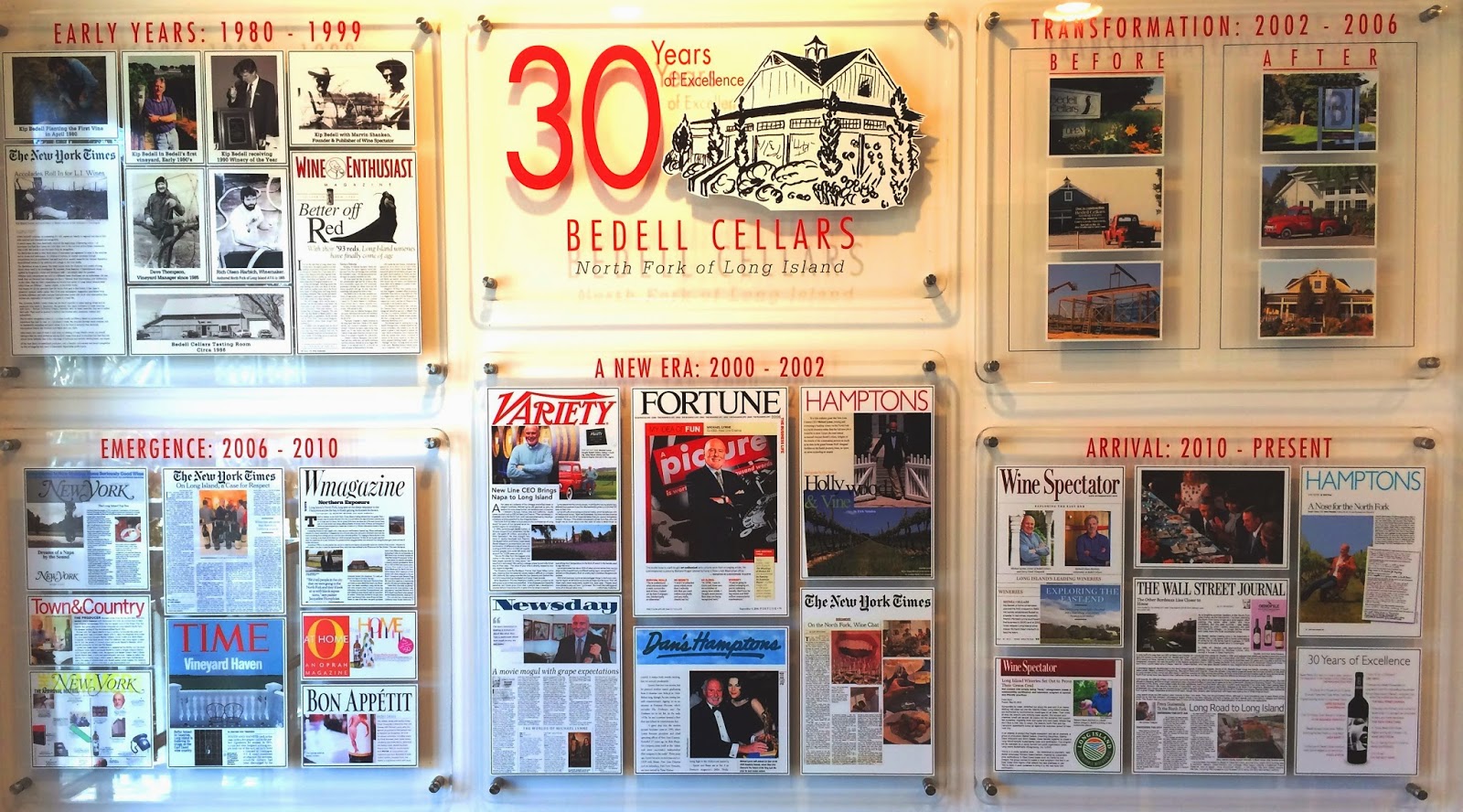 His picture is up on the wall at Bedell Cellars in their 30 year history highlights. He is inextricably linked now to Bedell and to the North Fork. He is respected by numerous wine writers up and down the east coast. Blah, blah, blah. And now he has a new vintage at Bedell. But that's not where the story ends. That's where it begins. Because as I said at the beginning this is a complicated story. 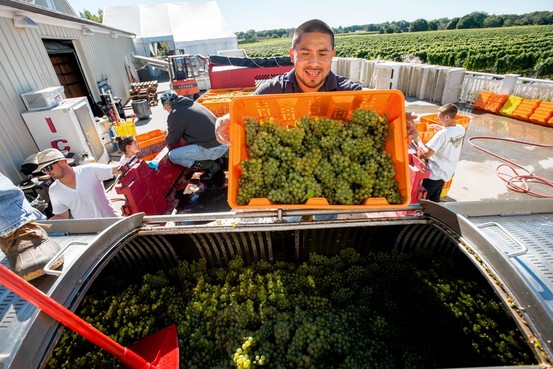 Enter Seferino Cotzojay. As Lettie wrote in the Wall Street Journal, of Seferino, "When Seferino Cotzojay left home at the age of 15, he told his mother that he was seeking "a better future" than he envisioned for himself in Guatemala. He made it as far as the Arizona border, where he was apprehended by the Immigration and Naturalization Service and taken to a youth shelter for undocumented minors. He lived there until he turned 18." 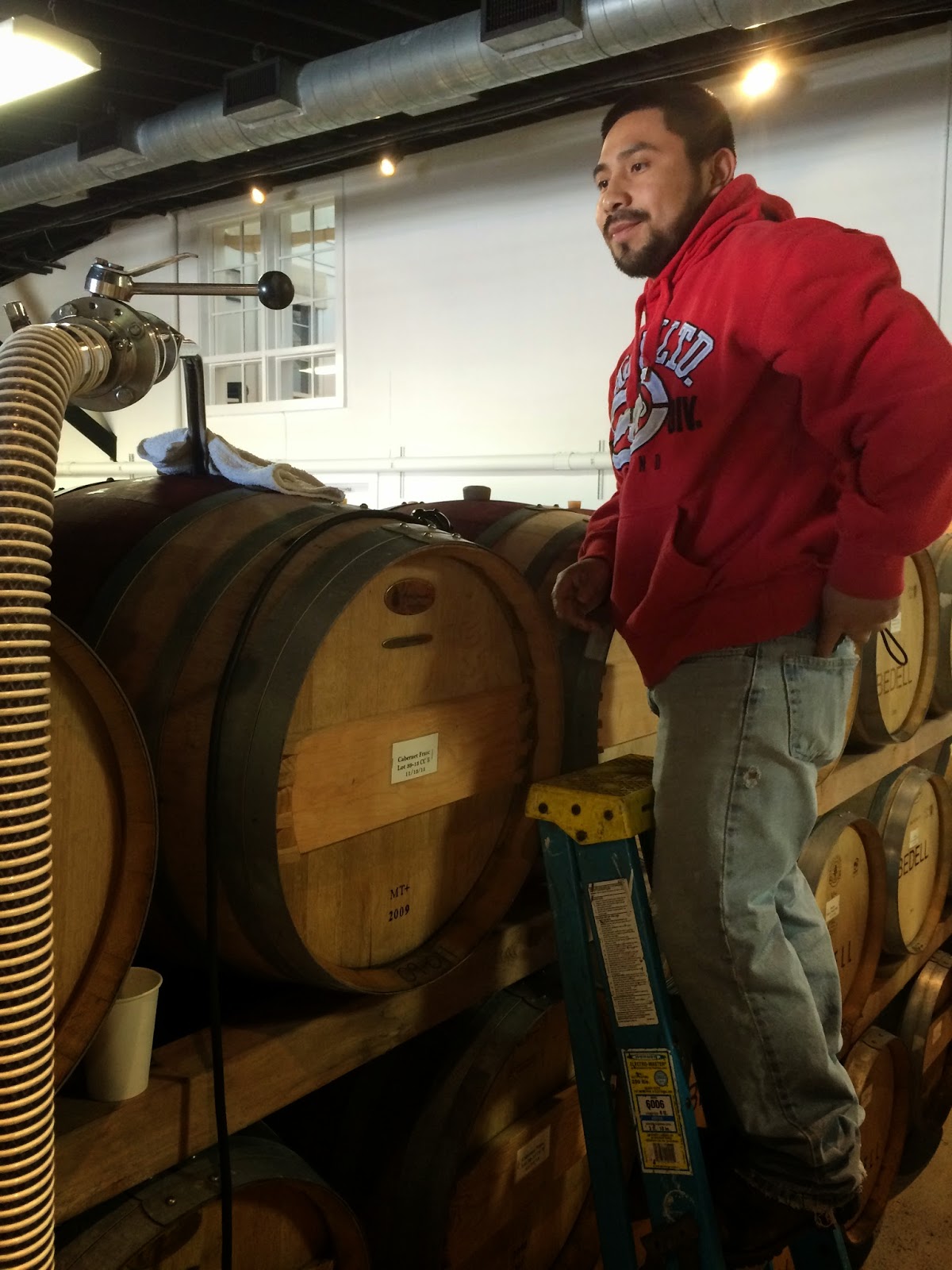 In 2005 Seferino started working at Bedell Cellars as what in the industry parlance is a cellar rat. He started at the bottom. He had been working as a landscaper with his brother, who had urged him to apply for the job. Seferino had never even tasted wine, but it seemed like a good job. But Seferino became enchanted by the place. The work. The wine. "Seferino grew up here," Olsen-Harbich told Teague. By the time Rich arrived at Bedell in 2010, Serefino has risen to cellar master. It became quickly apparent to Olsen-Harbich that his protégé had talent. "Sef had really good technical skills in the cellar; I was impressed by his knowledge and palate—and the vision that he had for the wines," said Mr. Olsen-Harbich. He promoted Seferino to assistant winemaker two years later. 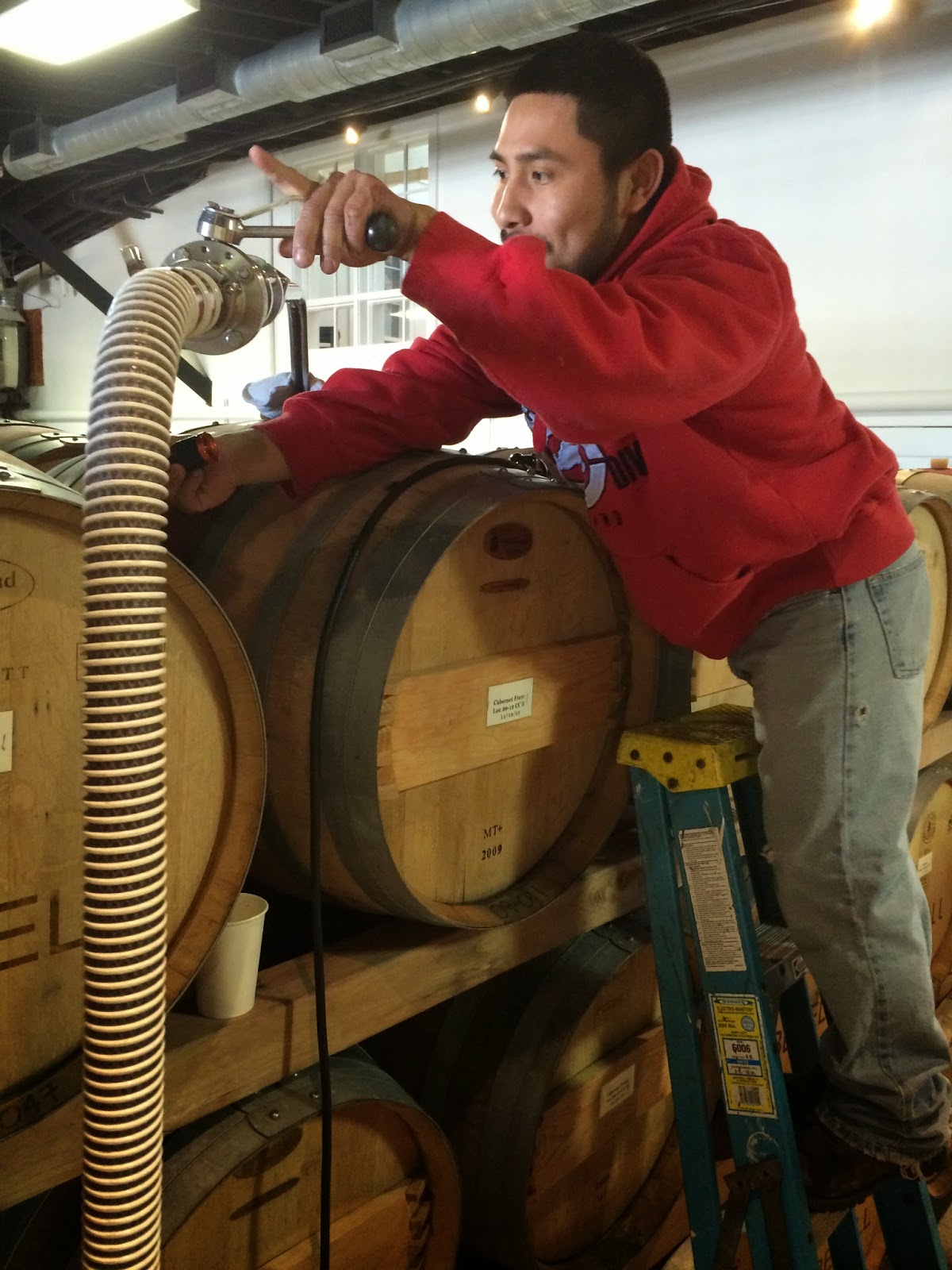 Seferino is an easy going guy. He likes to laugh. He is affable. He is wary toward strangers, but once initiated, he can be chatty. It is easy to see what Rich liked in his cellar master now assistant winemaker. On a recent visit, I chatted with them. But Seferino continued to work throughout the entire conversation. He never really stopped. We followed him as he worked. He laughed, and chortled, but he never lost focus of the task at hand. This was not an affectation. He's very serious about his job. Seferino told Teague that his job is "a dream come true." His enthusiasm and good nature are apparent and infectious. In his personal life he cheers on FC Barcelona, mourned Gabriel Garcia Marquez's passing, and loves music, listening to everything from current Latino artists to American R&B and Rap. 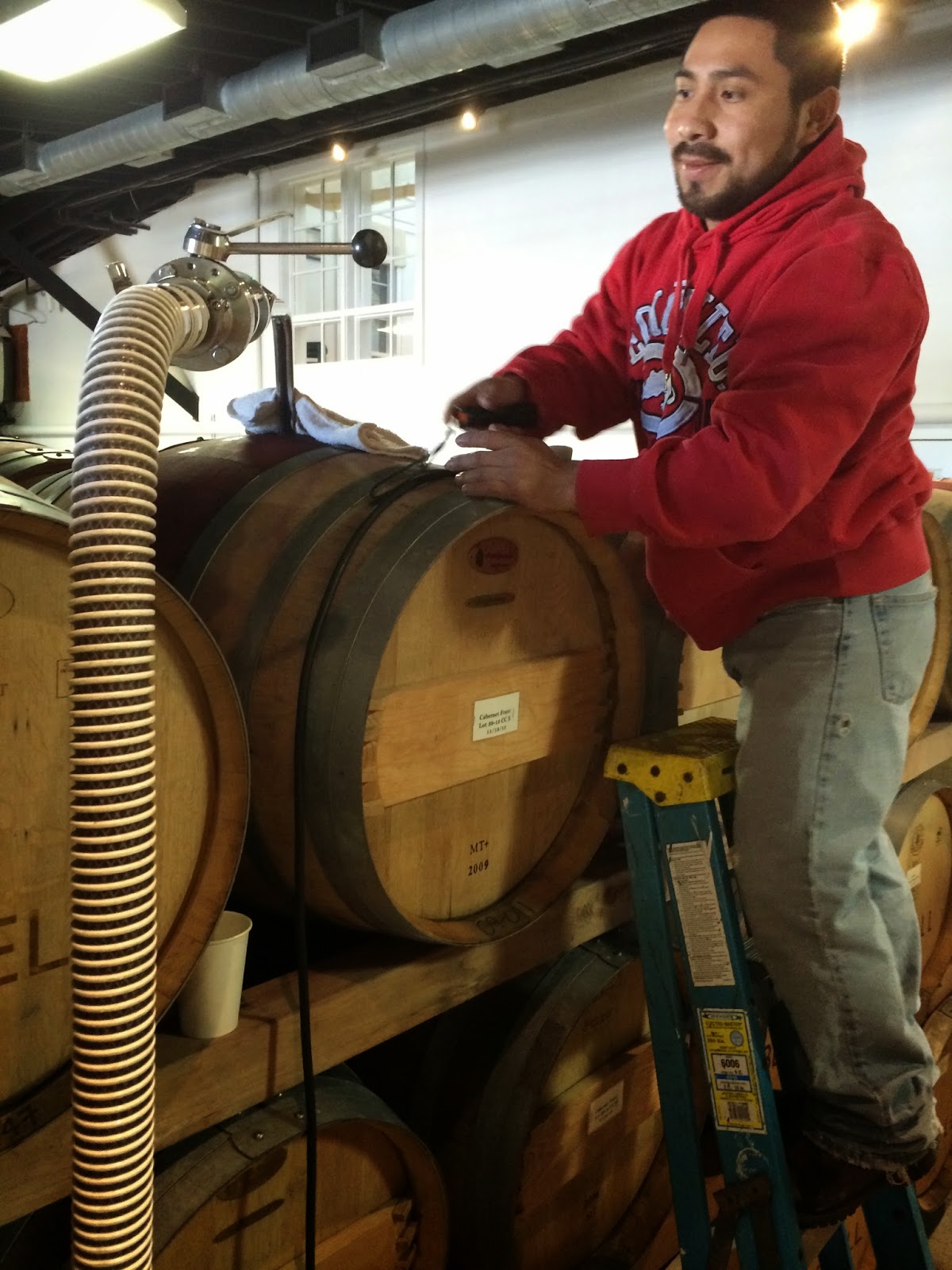 And this is where to me it gets interesting. It is very clear that Rich is handing down his knowledge to Seferino. Rich isn't that old. Middle-aged yes, but the mischievous blue eyes still twinkle. He's not going anywhere anytime soon. It is a master craftsman teaching up his journeyman assistant. But it is clear there is also a bond. A good bond. A bond of friendship and a shared sense of commitment and of a sense of humor. But there is a clear message that Seferino has at his command a sizable talent that is growing, and that Rich's experience is like a databank for Seferino to access. Mr. Olsen-Harbich is doing everything he can for this young man on the rise. And it is also clear that Mr. Olsen-Harbich has taken a shine to this young man because he feels it is time to give this knowledge to someone who is hungry for it, in a way that it will be used for the better of the region as time goes on. Because Seferino has fallen in love with the North Fork. 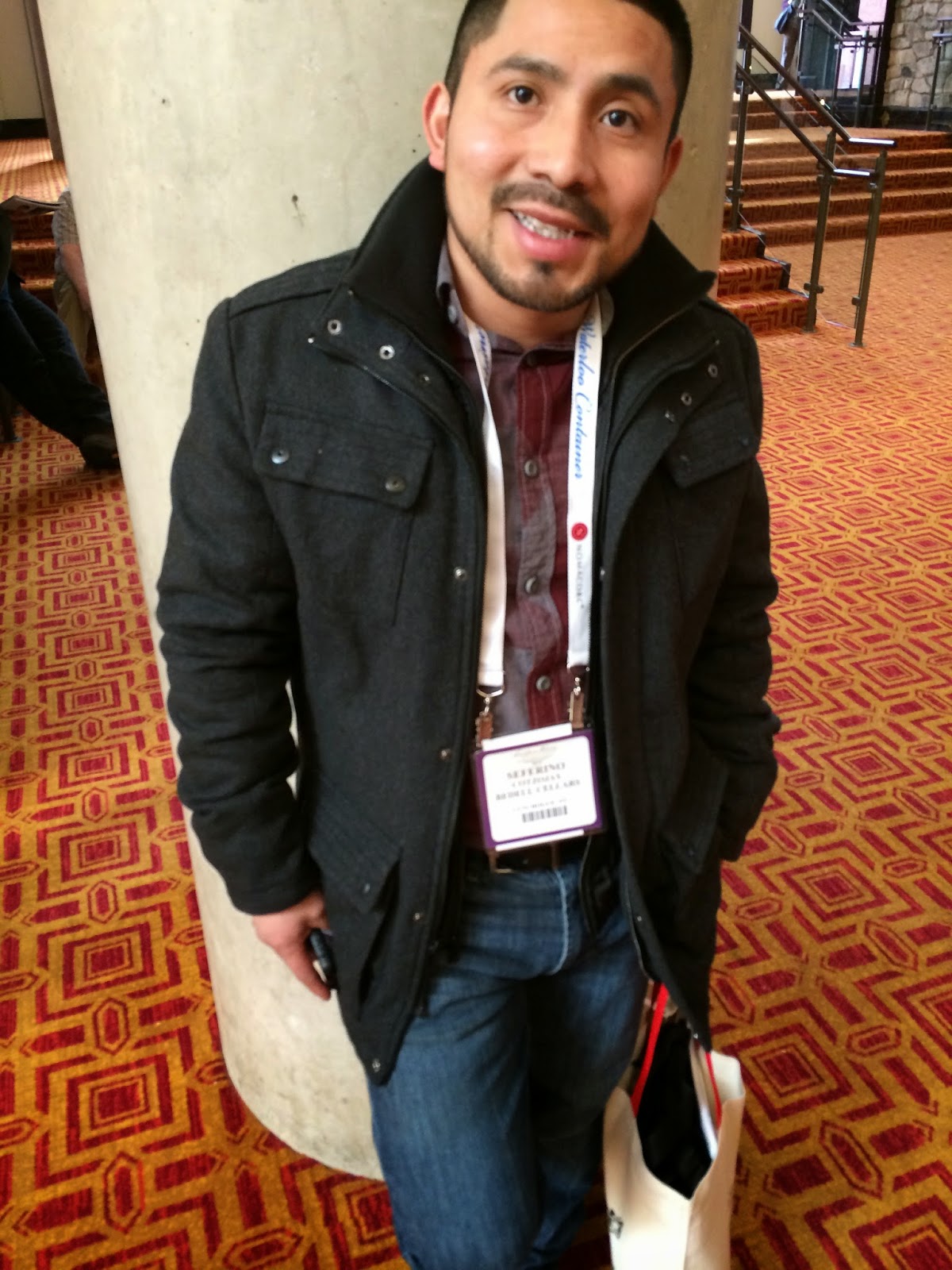 Once ubiquitous only at the winery, Seferino  can be found at wine tastings and trade shows, chatting with fellow winemakers or shopping for new equipment, new ideas, attending seminars, etc. This is the passing of a baton. All lives are like a relay race. Each of us takes a baton from someone (however likely or unlikely), runs with the baton and takes his or her own time to shine, and then, must needs, to pass it off to the next runner. In this particular race, it seems, Seferino is the next runner. People like Louisa Hargrave (founder of LI's first vineyard), and Kip Bedell, who founded Bedell Cellars (the winery that bears his name), gave opportunities to people like Rich and Eric Fry (of Lenz Winery) and many others. And now it is that generation's turn to begin handing over the reins to another generation. And for Rich and Seferino it seems there is pleasure in it for both men. 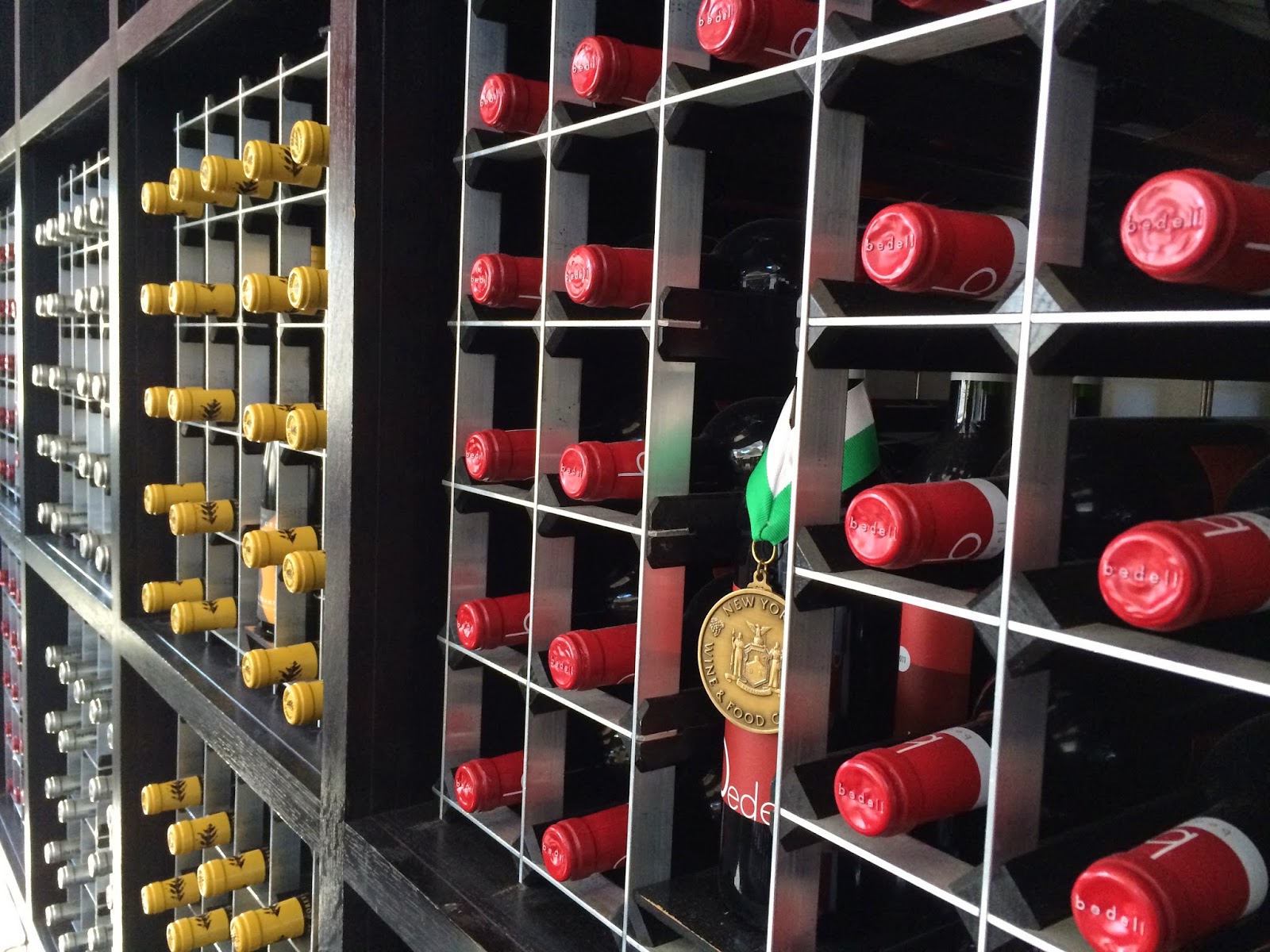 And thus, the 2012 releases are a meaningful release for both men. For Seferino, he has seen numerous vintages come and go, but this 2012 vintage is important because it represents his best work to date. It is the result of a cellar master and winemaker who is coming into his powers. This is no first attempt. But this is the vintage where he has had the most input, and most personal knowledge that have gone into it. And for Rich it is important because for the first time the wine reflects the Long Island Sustainable Winegrowers logo, a symbol of his and others fight to codify for good and all what sustainability means, and as a way to spread the good word on the North Fork. 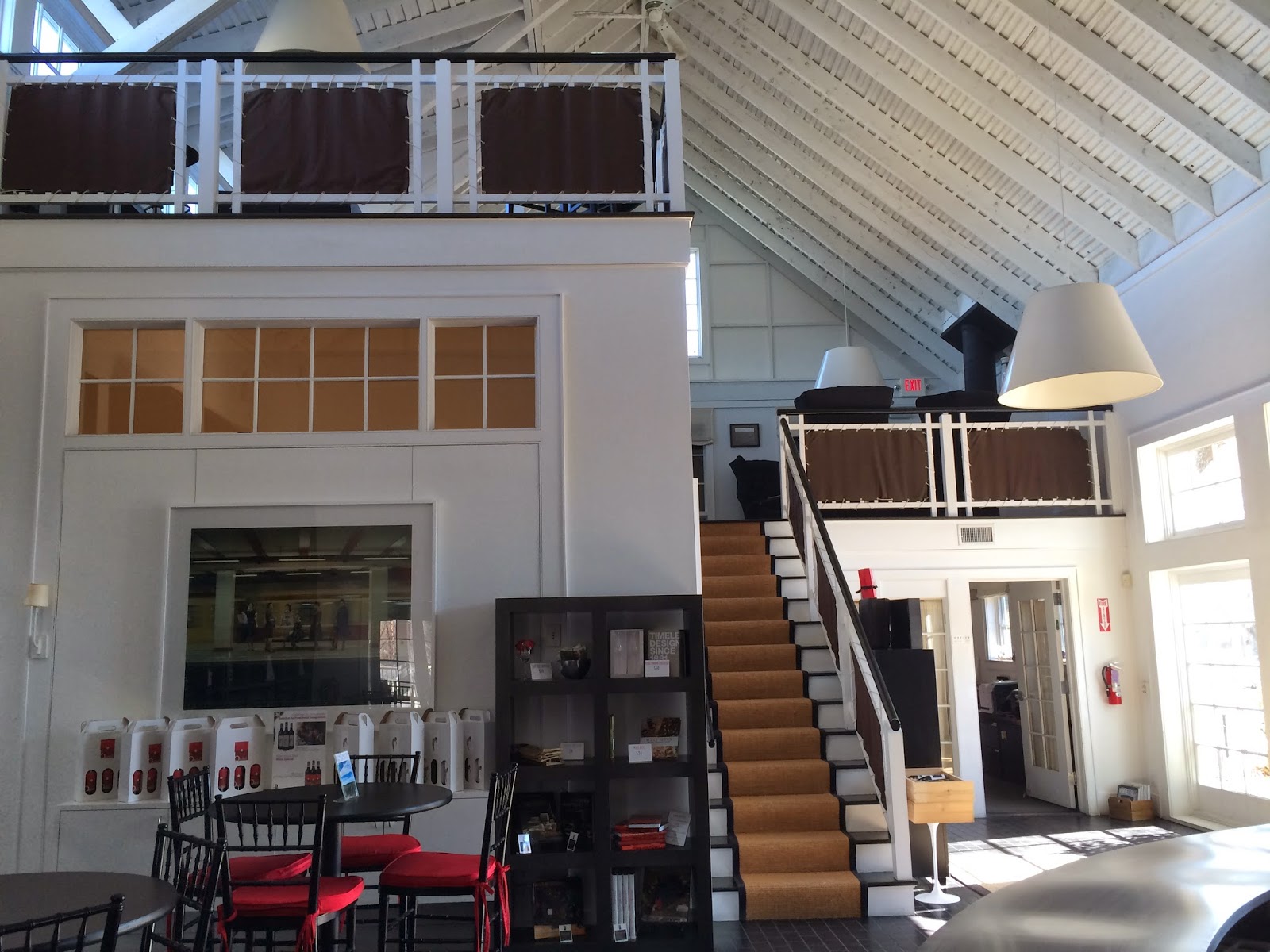 "This spring for the first time, many members of LISW (including Bedell Cellars) will begin to use a sustainable certification seal on their labels. This logo can only be used by those member vineyards that have completed and passed a rigorous vineyard inspection. It’s an important thing to look for;  when you see it on a wine you’ll know that the grapes were grown under the LISW program. Certified member wineries can begin to use the LISW seal beginning with the 2012 vintage," Rich wrote on the Bedell Cellars blog. "In just two years, LISW has emerged as a legitimate and serious program that already compares very favorably with programs that have existed for a much longer period of time. The 2014 vintage will mark the third season of LISW with 10 vineyards achieving certification in 2013. Current membership consists of 18 vineyards and wineries with over 700 acres under the LISW certification program."

"The East End of Long Island is renowned for its bucolic beauty and our wine is distinctive for its purity, vibrancy and intensity. By embracing sustainable practices, we will help to ensure that our quality of life as well as the quality of our wines will improve for many years to come and help lead us to a cleaner, greener island," said Olsen-Harbich.
Added to this is that the new black labels are a complete sea change for Bedell as well, and you only begin to understand the value and importance of this vintage. 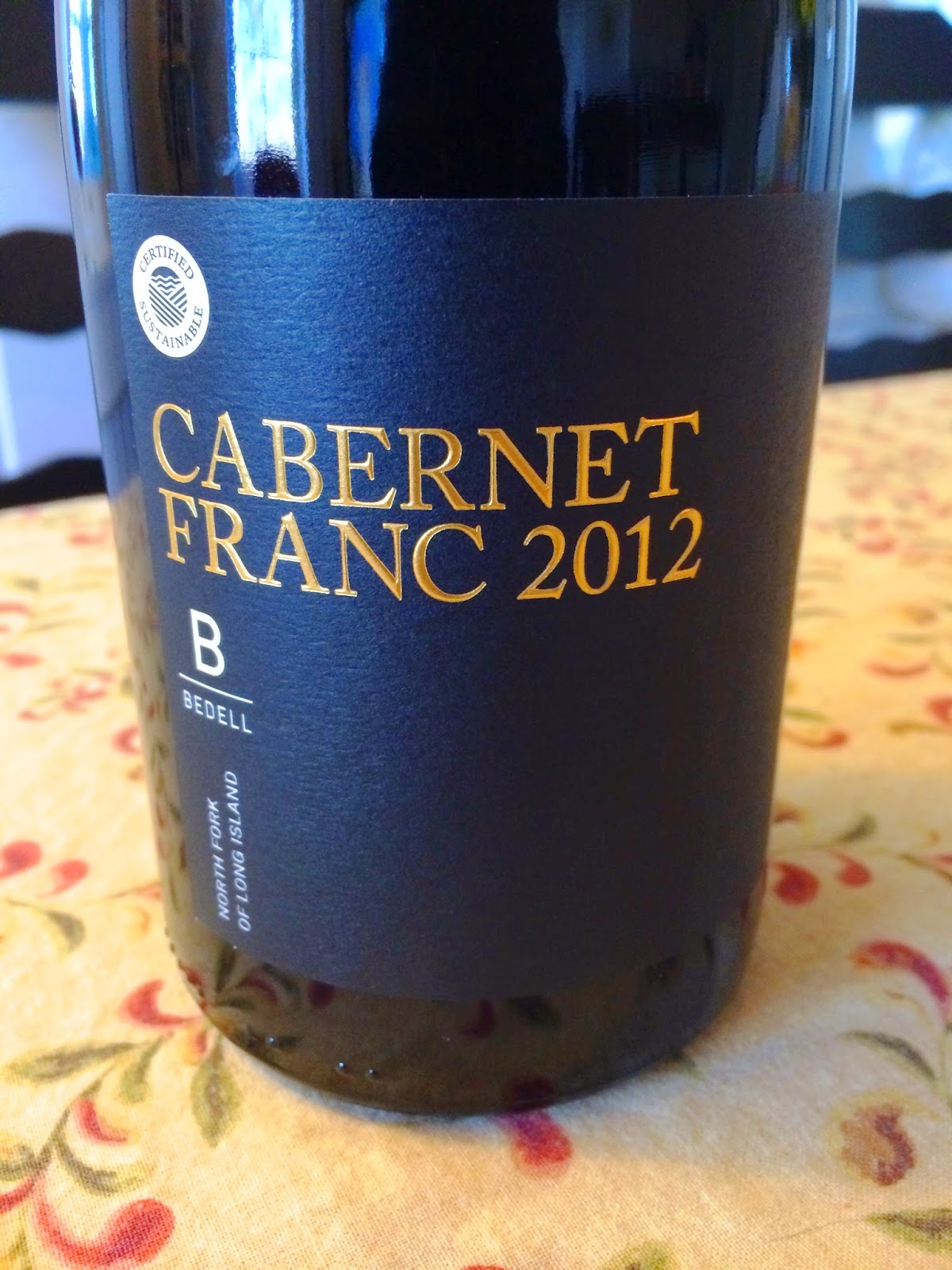 I was very excited to pull the cork on the new Black Label series. The Bedell Cab Franc 2012 with the LISW logo on it was no disappointment. Garnet is color this medium-bodied dry red wine was subtle and sexy. Out of the glass rushed strawberries and fresh raspberries. It smelled like raw fruit. But there were subtler aromas such as vanilla and spices. Across the palate bright and dark red fruits come across in a big way. The acidity here made the fruit linger on the palate beyond all reckoning. And the low tannins made it silky smooth an eminently drinkable. Olsen-Harbich has always had a light and delicate hand with Cabernet Franc, making soft, approachable wines that were light enough for a weekend lunch but elegant enough for Saturday night. He continues that winning streak here. Love his Cab Francs. 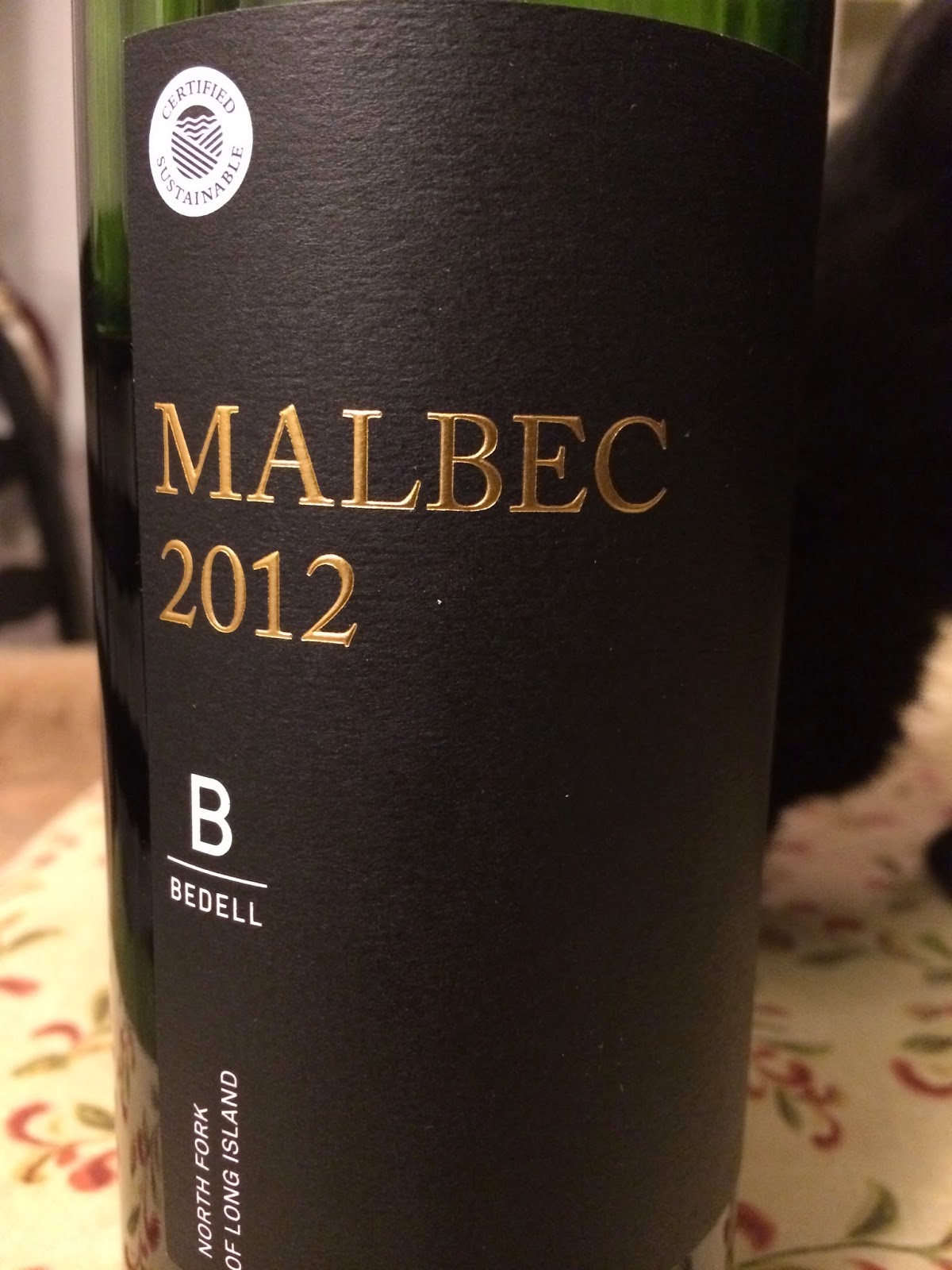 The Bedell Black label Malbec 2010 was another absolute success. It had the classic jammy nose of a good Malbec. A stew of red fruits and a grape-iness that one expects of a Malbec. But where some seem cooked and dark purple (especially the venerable South American brands), this had a lively reddish/purple hue, and a freshness about that was hard to describe. When you smelled it, you almost thought to look for a fresh baked biscuit to wipe some jam on. Again, soft tannins made the finish silky smooth and super, super easy to drink. Thick and luxurious, it was an absolutely lovely wine. 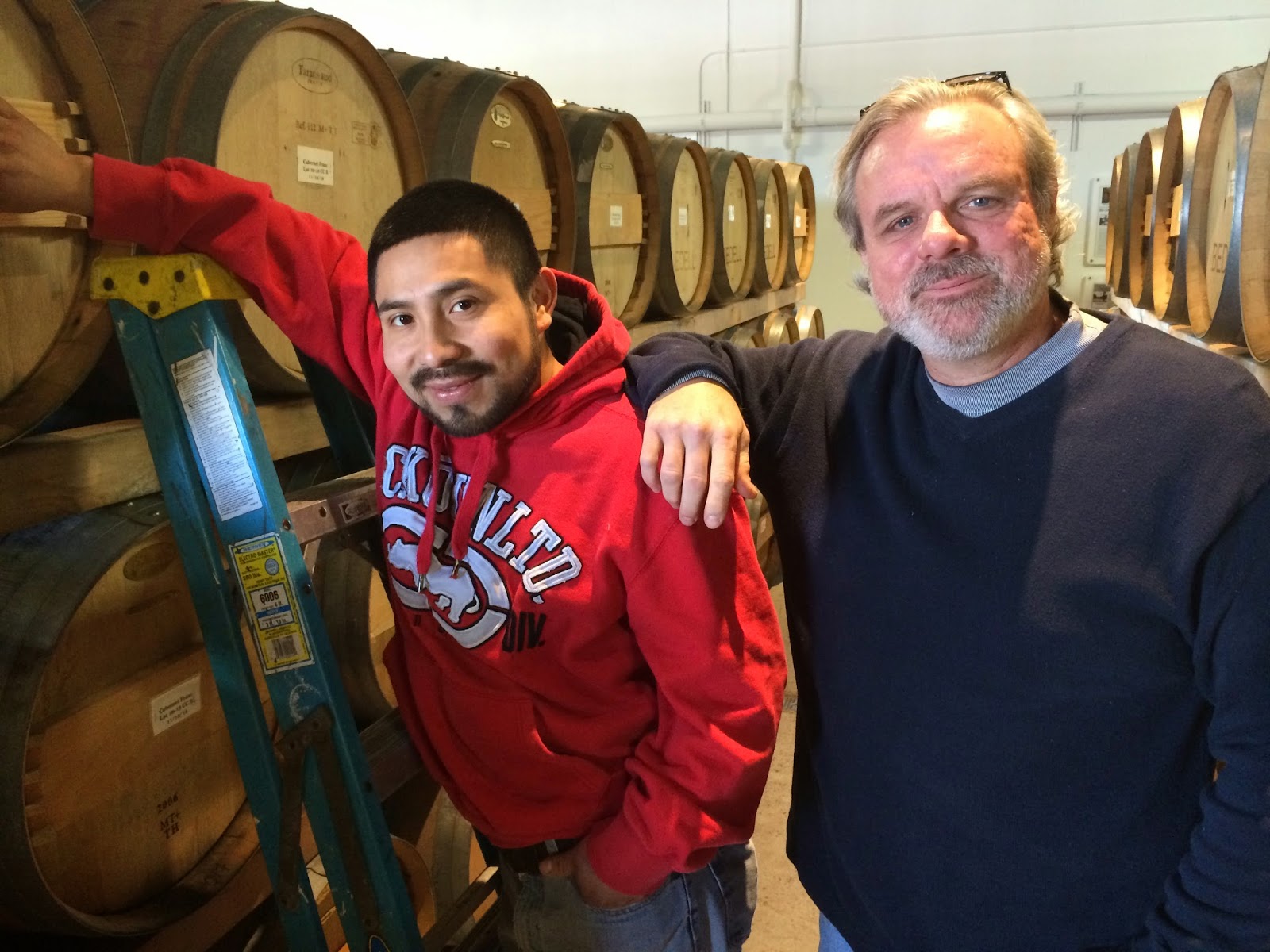 There is no question that the new Black Label Bedell Cellar wines are an absolute success. They are a professional milestone for both men. Tastewise. Sustainability wise. And friendship wise.

Family and friends are invited to come and support Kimberly & Ben Peacock, Owners of Tousey Winery in Germantown, as they conquer Ben’s battle with Burkitts Lymphoma. There will be a 50/50 Raffle, wine tastings will be available with complimentary light snacks. For entry into this event we ask that you either purchase a bottle of wine, or make a donation. This event is presented by “Friends of the Peacock Family”.