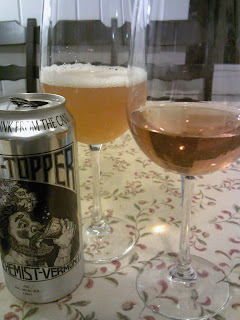 So, I am sitting here with my brother-in-law Robin Hoover, in my kitchen, and we are proving Jenn and John Kimmich correct. How's that?

John makes arguably the most famous artisanal beer in the entire east coast - Heady Topper.  Formerly of the Alchemist Brewery and now the Alchemist Cannery in Waterbury, VT. 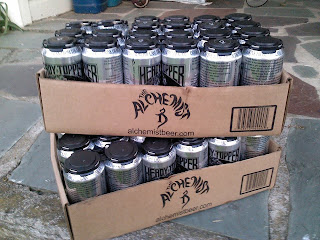 Recently, Robin had insisted on me watching some arcane video of John talking about the aging of Heady Tipper. He had brought me two cases of the Vermont elixir! But, I the purist, fobbed off such lobbying in the name of journalistic integrity. Of course, this post is proof of my own absolute arrogance and being a complete ass.

Robin was trying to teach me about a small term called "dropping bright." I told Robin I didn't believe in his marketing, drink-the-cup-of-Jesus bullshit. And he told me to GFY.

Thus, I went to the people's repository of knowledge, Wikipedia, and they said: 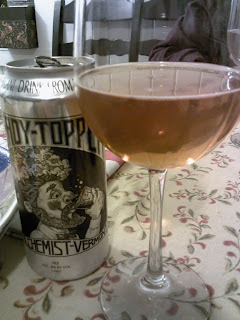 "When the concentration of fermentable sugars in the beer falls below a certain level, variable with the strain of yeast, the yeast cells will naturally flocculate and settle toward the bottom of the vessel in which the beer is stored; this act is known as dropping bright. The degree to which yeast flocculates is dependent on many factors, including the specific gravity of the beer, the gas pressure over the beer, the ambient temperature, and some biological properties particular to the yeast strain; some beers will never drop bright by themselves."

"Some breweries make available rack bright beer, which is cask-conditioned beer that has been dropped bright at the brewery and then racked, transferred, to a new container for shipment. Rack bright beer generally costs slightly more than ordinary beer, all else being equal, but requires less and care at the point of serving; in particular, dropping bright requires that the beer be left undisturbed to settle, as jarring or shaking its container will re-suspend the yeast.
Any beer which has been dropped bright or fined will have a layer of yeast at the bottom of its storage vessel." 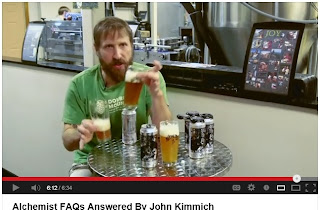 http://www.youtube.com/watch?v=amgfgU5-lhs
Thus, I was amazed, that John's YOU TUBE video was all about the aging of Heady Topper. As if to make me feel like an even bigger ass than I already am, my heartfelt brother-in-law demonstrated the example of dropping bright in my own house, when he found an extent can of the well known brew in the back of my refrigerator from whence he had brought at Thanksgiving of 2012.

Thus the pouring was on!

Indeed, if you watch John in the video, you will see him talking about aged Heady Topper, but my brother-in-law Robin demonstrated the color variation in two wine glasses, which is the preferred glass is a vaguely tulip shape. 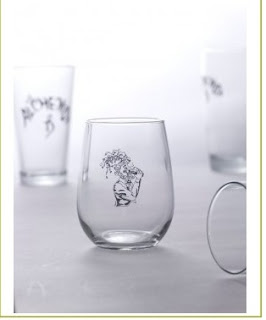 Robin, my esteemed relative, proved John Kimmich right. By pouring the older Heady next to a brand new Heady, we proved John Kimmich correct. The newer Heady was a yellowish, bright ale, with a nose full of grass! The older one poured crystal clear amber with a slightly more aged nose. Fantastic!!!!

Memo to John Kimmich: Make two or three barrels of aged Heady and put it in 750 ml bottles with corks, and charge three times as much. The wine and beer writers will eat it up.

In the meantime, I will enjoy the Heady in my wine cellar, some of which is aging. Some is on the short list for immediate consumption.