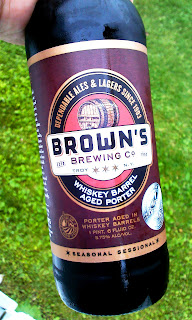 Back in 1993, Garry and Kelly Brown had a vision to turn a 150 year-old warehouse on a then-blighted River Street in Troy into a fully operational craft brewery. The building was previously owned by a local printing company and had been gutted by a massive fire and the project took three painstaking years to complete. However, the endeavor was well worth it as Brown’s Brewing Company became an instant success as the first brewery restaurant in the Capital Region.


Today, their River Street Taproom in Troy, New York is a social hub for the community and offers a menu that compliments the beer we brew on site. They brew over 25 different styles of ales and lagers throughout the year and serve over a dozen beers on tap at any one time.


They won the TAP New York’s 2008 Matthew Vassar Cup for the Best Brewery in Hudson Valley, as well as a Gold medal for our Pale Ale by the Culinary Institute of America. They also won prestigious World Beer Cup Gold and Silver Awards for our Oatmeal Stout and Whiskey Porter, respectively, and Metroland readers have voted them Best Brewpub in 2008 and 2009.


Brown’s Brewing Company has plans to open a production facility in a converted 19th century mill along the Walloomsac River in Hoosick, NY.


First, Brown’s makes a classic English Porter. They use two malts including Domestic Two Row Pale & Caramel Malts and then they add Chocolate Hops from Willamette. Then they take a portion and age it in a genuine bourbon whiskey barrel for two months. The barrel imparts the fine characteristics of bourbon and oak into this complex ale.


I was first introduced to this style of beer by Joshua M. Bernstein who is the author of BREWED AWAKENING about cutting edge techniques and trends in the beer industry. A fantastic book and author. But I became hooked on this massive beer.


Make no mistake. If you like big stouts and porters….this is the beer for you. Big chocolate flavors, Hints of vanilla and spice. A touch of licorice…and of course, a big nose full of bourbon.