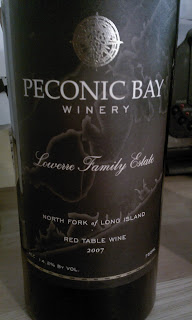 So, the Peconic Bay Winery Lowerre Family Estate 2007 won the prestigous Wine of the Year from the New York Cork Report. Hmmmm. How good was it? This question had been on my mind since the wine won the award a little less than a month ago at this point...or thereabouts.

So when Lenn Thompson, NYRC's Editor-in-Chief told me he was bringing a bottle, I asked my wife Dominique what we could make for dinner that would live up to that kind of wine, if it were as good as the editors of NYRC had selected.

She found a recipe for flayed lamb roast rubbed in rosmary, salt and pepper and grilled to perfection (bloody middle, medium away from the center, and crispy ends - done in the dark and rain I might add!). We paired it with a been and vegetable salad from CLEAN FOOD by Terry Walters (one of my wife's favorite new cookbooks),and a loaf of rustic bread from LOAF in Hudson, NY.

Peconic Bay Winery was founded and the vineyards planted in 1979 by the late Ray Blum and originally managed by the late viticulturalist and winemaker Charles Flatt. Originally the farm meant to sell all of its grapes, but by 1989 the fruit was all going towards producing wines there on the estate.

Incredible changes were coming though as more attention was paid to the region. In January of 1999, Manhattan based banker Paul Lowerre his wife Ursula purchased the winery from Blum with the intention to bring the property to new heights. A renovation of the vineyard by Charlie Hargrave including new vineyards on nearby Oregon Road, and the introduction of the outstanding winemaking of winemaker Greg Gove was meant to bring about these changes.

In 1973, Charlie Hargrave worked with his brother Alex and his sister-in-law Louisa Hargrave to establish Hargrave Vineyard, Long Island’s very first winery. As the area’s first vineyard manager, Charlie brings a wealth of experience with him to Peconic Bay Winery. Guiding our viticulture and stewarding of Peconic’s beautiful and sprawling waterfront acreage Charlie is on top of every vineyard concern, from winter pruning through the harvest post-season wrap up, and everything in between. His work is critical to the winery’s success. Currently managing about 55 acres under vine, Charlie applies sustainable vineyard practices, and aspires to take the vineyard on as organic a path as possible.

After studying Chemistry at both Cortland and Columbia Universities, Greg Cove launched his winemaking career right here on the North Fork. His innate understanding of local soil, climate and quirks of nature are reflected in his wines, as are his instincts for weaving nuances of flavors, sensations, bouquet and acidity to achieve the fullest expression of a harvest. “Complexity and balance,” Greg says. Really. He says that all the time. And people listen to him, since he’s won more than 50 medals in various competitions, including two international Golds, and the coveted Double Gold at the New York Wine and Food Classic.

Aged 26 months in oak, this 2007 vintage blend is an encapsulation of the best that vintage had to offer. The finest lots of Cabernet Sauvignon, Cabernet Franc and Merlot were blended to create a magnificent red wine.

The wine was a dark, inky purple red. And nose was full of blackberry, cassis and chocolate and mocha. Maybe some violets as suggested. On the palate lots of fruit - raspberry, blackberry, and hints of pepper. Plummy with hints of cassis or prune. The acid is kept in check, the acids are soft, and the tannins are in balance with the acids. When you drink this wine, fruit is the lasting flavor on your palate. Fantastic!

Wine of the year? I don't know. Always hard to say. But I do know you couldn't go wrong picking it. This was one incredible meritage style wine with sophistication and flavor. A tremendous accomplishment! You could serve this to the biggest wine snob and they would walk away utterly impressed. Wow! Great wine!
Posted by Carlo De Vito at 4:58 AM