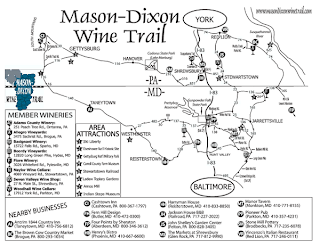 The first real test of the new Mason-Dixon Wine Trail takes place in under two weeks, as the seventh annual Tour De Tanks will get under way.

A number of regional wine trail across both states hold events that feature barrel tastings -- the Brandywine Valley Wine Trail, for instance, will hold a similar event the same five weekend in March -- and some individual wineries make the wine in the barrel available to case club holders.

Tour de Tanks has grown substantially during the first six years that it featured the wines of the UnCork York Trail. Many of them remain on the trail that was conceived and announced last fall, but there are several important changes. The new trail includes two Maryland wineries -- Fiore and Boordy -- and one new winery -- The Vineyard at Hershey -- southeast of Harrisburg in Londonderry Township, off Route 283.

This is the first major trail event for Cara O’Donnell, destination marketing manager for the York County Convention & Tourism Bureau, which handles publicity for the trail. She noted that it’s bigger and longer (thanks to the five weekends in March) yet continuing to offer the winemaker’s dinners that have become a staple of this event. You can find the list of dinners here. Passes cost $25/person and $15/designated drivers, still allowing them to sample the many foods that will be out. Tickets are available on the trail's site and through the individual wineries.

“Everyone does things a little differently," she said Monday by phone about what pass holders can expect. "and we give the winemakers a little flexibility there to personalize the experience. But I would say that people are going to experience special barrel tastings, kind of that sneak preview experience of what this year's vintage is going to bring. There are also generally food pairings and special tours of the winery that aren't usually available on a regular day."

The 10 days will give those holding the passes a change to drive to the various clusters of wineries. There are the several in York County, another few in Adams County around Gettysburg, a grouping around Harrisburg/Hershey, and some heading out Route 30 toward Lancaster.

Wine Off The Vine, the trail's inaugural event, took place last November over two weekends, and some of the winery owners north and east of York said afterward they were disappointed in attendance. Five weekends should provide a far more accurate barometer of whether this many wineries, spread out over two states and four counties, can all benefit from a trail event.