So there I was at Dinosaur BBQ staring down a mountainous plate of Memphis-styled ribs, with coleslaw and whipped sweet potatoes and corn bread. Ah, is this heaven? But what to wash down this lusty dinner with?

How about an Old Burneside Dity Penny Ale. Old Burneside is one of the more colorful east coast breweries, with their llove of bag pipes, but they made good beer. So, here's the story on Old Burneside and the beer.

The Olde Burnside Brewing Co.is a spinoff of an old family-owned ice manufacturing business, The Burnside Ice Co., which was founded in 1911. In keeping with their roots, they add a bit of Celtic color in all they do, including theirsponsorship of a local bagpipe band, Manchester Regional Police & Fire Pipe Band, as well as their local rugby team, The Hartford Wanderers. Come fall, join us at “Pipes in the Valley,” Connecticut’s premier Celtic music festival, showcasing the finest local and world renowned Celtic talents.

It all actually started two generations ago, when The Burnside Ice Company was established by Bob McClellan's grandfather just after the turn of the century. Coming from a long line of hardworking Scotsmen, Albert McClellan wasted no time in making Burnside Ice a leading supplier of ice to homes and businesses throughout the greater Hartford, Connecticut area. His tradition was carried down to Bob's dad, Clifford and to Bob as well. As the story goes, Bob remembers his grandfather speak of the ales that were brewed locally in those days and how refreshing they were after a long day's work. Often the cost for a pint of ale back then was a mere nickel. On special occasions, the brewers would produce an extra fine ale for which they would charge a little more; often as much as a whole dime or ten pennies! Those were the ales that Albert McClellan lamented were no longer available in later years.

Bob, being a beer lover in his own right, dreamed of someday being able to savour a true "Ten Penny Ale". He even fancied the idea of becoming a brewer someday, brewing the stuff himself. As years went by, the ice company flourished, now supplying mostly grocery stores, package stores, restaurants and caterers as well as folks planning parties and picnics. The popularity of Burnside's product was due largely to the purity of the water emanating from the aquifer deep beneath the earth under the East Hartford neighborhood. At the urging of several local residents Bob began to offer the water through a dispenser at the front of the building on Tolland Street.

Back around 1994, Bob noticed several of his water customers coming in for fairly large quantities of the water. Out of curiosity, Bob inquired as to their use of so much of the water and they heartily responded with “Brewing beer!” Apparently, Bob’s water had qualities that made an especially clean, pure and flavorful ale, without chemical or other unwanted tastes. Bob was immediately intrigued and sent off a sample of the water to a local lab for analysis. The tests revealed that the water was surprisingly similar in mineral characteristics to the famous waters of Burton-on-Trent, the source of water for many of the celebrated ales of the United Kingdom.

The original recipe for Ten Penny Ale was an award-winning creation of their first head brewer, Ray Ballard, and local beer guru, Paul Zocco. A subsequent search for used brewery equipment to outfit the new brewery resulted in a trip to Sheridan, Wyoming, to the Wyoming Brewing Co., which had just recently closed. Transported by four trailer trucks, the brewery was assembled in what was a 4-bay truck garage at the ice plant, which now houses the entire Olde Burnside Brewing Co. The current head brewer, Joe Lushing, along with his assistant brewer, strive to carry on the tradition of making great ales. 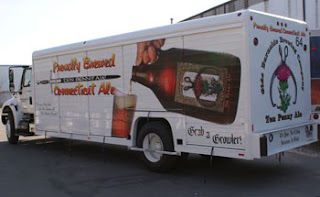 On the other hand, “Dirty Penny Ale” (5.2% ABV) is a hearty, but never heavy “black’n’tan” style* which is mixture of 60% Ten Penny/40% their own signature stout. There's lots of roast here, with nice hints of roasted coffee and chocolate. There's a slight hint of hops, but nothing too overpowering. This beer comes together nicely, and if both mouthfilling, and refreshing, as any good black-and-tan should be. 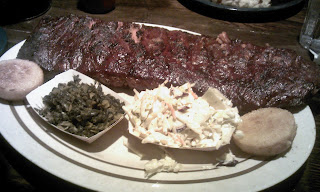 Two Dirty Penny's later, and an empty plate, and I was a happy boy. It's a nice stand alone beer, but it's also a great food beer. Important. Great stuff!
Posted by Carlo De Vito at 4:11 AM