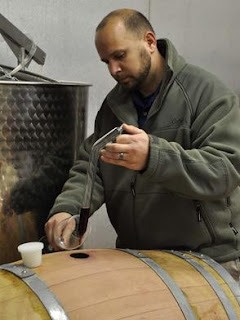 Mike DeLuca is pictured testing his Merlot, which won’t be ready for a couple years. Once a red and white wine have been established, the DeLuca’s will open a winery.

More than 400 individually-owned grape vineyards are in the state
N.C. is home to over 100 wineries, the number having quadrupled since 2001.
The state ranks ninth in the U.S. for wine production
Asheville’s Biltmore Estate is the most visited winery in the U.S.

DeMariano Vineyards, a local family-owned wine producer, was the recent recipient of a $6,000 WNC Agricultural Options grant. The vineyard was among 25 farms in Western North Carolina, including three in McDowell, that were awarded last month.

These grants are provided through N.C. Tobacco Trust Fund Commission and are available on a yearly basis.

DeMariano Vineyards is in its fourth year of grape production and begins bottling its first fruits of labor this spring.

“This came at a good time,” said Mike DeLuca, co-owner of the vineyard. “We’ve got 120 gallons of Chardonnay ready to go in April and still need to purchase equipment for bottling – among other things.”

The vineyard is a father/son partnership. Mike’s dad, Mario, works the vineyard, while Mike handles the winemaking. The vineyard is named after Mike’s great-grandfather, Mariano, who kept one of his own in New Jersey.

“I’ve always had a love for it,” said Mario. “I grew up helping my grandfather in his vineyard, and Mike’s been making his own wine for a while now, too.”

Grape varieties growing on the land include Cabernet Sauvignon, Merlot, Chardonnay, Sangiovese and more. The men planted their first vines in May 2009.

“It’s a family operation,” said Mario. “Our wives (Margaret and Keisha) help run things too, and during harvest season, we have other family members and friends who turn out to help.”

Wine-making is a slow (and costly) process. It takes four years to get a vineyard’s trunk and root system stable enough for full production. In its first year, a vine yields no grapes; the second, around 15 percent; and the third, around 75 percent.

It’s estimated that an acre of grapes cost around $14,000 to $15,000 to turn into wine. This does not include equipment, labor, accommodations or unforeseen situations. The DeMariano vineyard is currently one acre in size.

“Hopefully after this year, we should have about 90 percent of the necessary equipment and facility accommodations to move on,” Mike stated.

Plans to build a winery will come to fruition once the business has established a red and white wine for sale and tastings.

“We’re thinking of situating our winery where patrons can enjoy views of the vineyard and South Mountain range,” said Mario.

The vineyard sits on 105 acres of open pastureland in Dysartsville.

After their first vintage is bottled in April, the wine will have to sit at least another year, maybe two, before being sold. Their red wine, even longer.

From the labor aspect, not much is to be done during winter months. In March, however, things will pick up. The DeLuca family will begin pruning and preparing vines for the upcoming crop. From then, two to three days of work each week is required to maintain healthy grapes.

“We enjoy it. It’s an old family tradition, and runs in our blood,” said Mario. “This was my plan after retirement, and I’m happy to be able to work with my son doing something I love.”