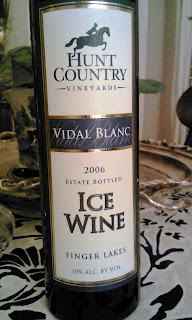 In the fall of 1981, Art and Judy Hunt received their Farm Winery license, and embarked on a journey to make wine. It must have seemed like a long shot. But now Hunt Country has been in business for more than 30 years.

In that time the Hunts have been an important force in New York wine. They were among the first to sell their Finger Lake wines in New York City's Greenmarkets, establishing themselves at Union Square and Grand Army Plaza more than 20 years ago.

And they've been a friend to many other winemakers throughout the state offering advice and help to many aspiring winery owners. As well as solid citizens of the Finger Lakes community and the Keuka Lake area. And their wines are now available in 28 states.

I have seen Art talk at many conferences on many subjects. He's always happy to offer advice with great humility, and always with a friendly smile.

Winemaker Christopher Wirth's elixir is absolutely fantastic! With big aromas of honeysuckle, honey, apricot, and tropical hints as well, the wine is unctuous and golden. With a big shot of apricot, raisin and honey on the mouth, with just the right amount of acidity to balance it all out. What an absolute knock out. This is absolutely one of the best dessert wines made in the United States. Certainly one of the best wines to come out of the Finger Lakes. If you don't believe me, here's some other awards and distinctions:

Congrats to Christopher Wirth, and to Art & Joyce Hunt on thirty years!
Posted by Carlo De Vito at 6:38 PM