Derek Grout of Harvest Spirits in Valatie, New York, loves to fool around. With tousled blonde hair, and turtleneck sweater, he looks like a guy who just walked out of an LL Bean catalog or into a ski lodge. And he’s got a pleasant disposition to boot. He is confident and cheerful, with a wry sense of humor. Derek is the moving force behind Harvest Spirits (along with his wife Ashley) which is the home of the now famous Core Vodka, made from 100% apples. 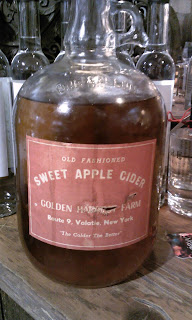 Harvest Spirits is based at Golden Harvest Farm, which has been in Derek’s family for three generations. It is one of the largest commercial farms in the region, and is one of the biggest points of interest in Columbia County, popular for its farm store, filled with fresh apples, baked pies, cider doughnuts, and in the fall, pumpkins. On Saturdays and Sundays the most difficult part of getting to Harvest Spirits in sneaking in and out of the parking lot. Derek, in the meantime, has fun fermenting and distilling almost anything. He seems to want to try anything once. While on my recent trip to Harvest Spirits, he had a dozen different concoctions going, and on any visit he might pay us, he’s always got something new to try. The distillery is packed with highly decorated barrels and tons of mason jars with anything from fruits to herbs to other spices trying to find the next fun flavor. So it was no surprise when he enticed me over to his tasting counter and started talking, that I would try something new. 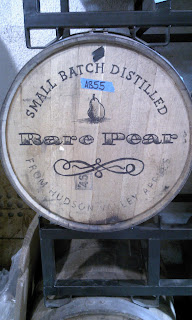 The first thing he wanted me to try was the new Core Black Raspberry Vodka, made from distilled apples and raspberries. Packed in the classic Core package, the vodka is decisively dark pink, with the same distinctive lettering that has made Core Vodka such a hit, and which has made Harvest Spirits one of the most highly regarded distillers on the east coast. The nose is all raspberry. And the taste is fantastic.It’s not sweet by any measure. I had to taste it twice. Looking at the liquid and smelling it, one could taste a very robust essence of raspberry, but with eyes closed, it finished like a fine vodka. This was an exceptional flavored vodka. An incredible accomplishment. Great alone or an intense part of any cocktail. 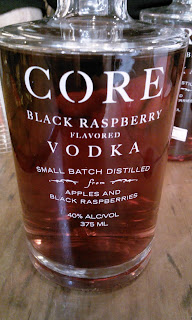 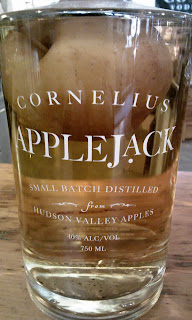 What you need to know is that Derek is a traveler, and he has spent lots of nights in France as part of a cider and wine making exchange program in concert with French cider makers and distillers. While in France, Derek learned how to put the fruit in the bottle. Cornelius Applejack now comes with a locally grown apple inside. A little bit of old France right here in the Hudson Valley.

Harvest Spirits is an excellent small craft distiller. And you need to try their products.
Posted by Carlo De Vito at 5:48 PM