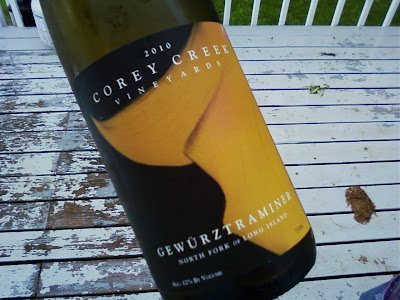 What ever happened to the Corey Creek label? Bedell bought the gorgeous property some time ago, and since then they've slowly taken one wine away at a time. The only wine that I currently know of being made under this label is this new Gewuztraminer.

Corey Creek was founded in 1993, by Peggy and Joel Lauber. They sold out in 1999 to Bedell. The property itself produces chardonnay, Merlot, Cabernet Franc, and Gewurztraminer among others. And the fruit at that winery produced some of the best chardonnays and gewurztraminers in the state.

Not sure if they are making a chardonnay anymore or not. I didn't see any on the Bedell sight. Corey Creek's tasting room and gift shop is an airy, barn-like building with glass doors opening onto a wide, south-facing outdoor deck. The high elevation of the tasting room gives visitors spectacular views both inside and out overlooking the vineyard. Certainly, the view of the vineyard is one of the most spectacular in all of the North Fork, with those two big, beautiful bushes just off the back veranda, and the vineyard spreading out before you.

It'd be nice to see Bedell re-invigorate Corey Creek, and give it a more meaningful reason for being. On the other hand, if they needed some encouragment, I would be happy to sing the praises of their newest Gewurztraminer 2010 made by Richard Olsen Harbich.

This Gewurztraminer from Olsen Harbich was produced from 30-year-old vines fermented with indigenous yeast. It had an absolutely huge nose with incredible aromas of orange blossoms, honeysuckle and other citrus. Lots of big fruit upfront. On the palate there was lychee, honeydew, green tea and minerals. There was also a brigh acidity. Great balance between fruit and acidty here. Just a fabulous light white, refreshing, clean, and bright. An absolutely fantastic wine! Easily one of the best gewurztraminer's I've had in a while.

This newest Gewurztraminer from Corey Creek is an absolute winner!

Original label art by Howard Schatz.
Posted by Carlo De Vito at 7:04 AM