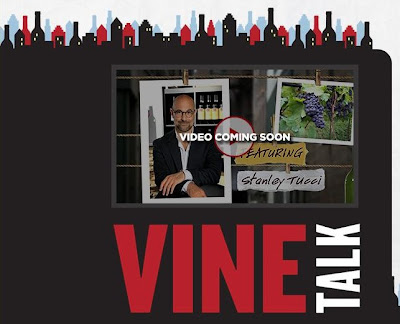 From Jim Trezise, President of the NYWGF -

Finger Lakes Rieslings will be showcased in an exciting new public television series called "Vine Talk" that will be aired nationally beginning next spring and hosted by Stanley Tucci. This represents a major opportunity to spread the word about the New York wine industry to millions of people throughout the country.

The 20-part series is a unique blend of education and entertainment, featuring a combination of wine experts and A-list celebrities who swirl, smell, sip and savor the wines and share their impressions. The series is built around 20 different varietal wines like Chardonnay, Cabernet Sauvignon, and Pinot Noir in conjunction with the regions well known for them--like Finger Lakes Riesling.

I have been working closely with the Vine Talk produers for weeks, first by rounding up 17 Finger Lakes Rieslings, based on awards and scores, for a four-person panel of wine experts to evaluate and narrow down to six finalists for the show. The panel included a retailer, a distributor, an award-winning sommelier, and a food/wine writer from a major publication. Then, on Monday evening, the actual taping of the Finger Lakes Riesling segment took place at the WNET public broadcasting studios in Manhattan. Both a studio audience and a celebrity panel tasted the six Rieslings, and each group selected a favorite while engaging in lively discussion.

You can get the basic information at http://www.vinetalk.com/.