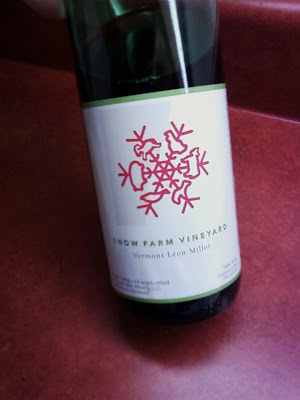 So, here's the second recommendation from our recent sojourn to visit my brother-in-law - Snow Farm Winery 07 Estate Leon Millot.

First off, I'm a little late to this party. Snow Farm Winery has already been mentioned in such prestigious pubications as Wine Spectator, Wine Enthusiast, the New York Times, National Geographic Traveler magazine, The Boston Globe, The Washington Post, The Hartford Courant, and Edible Green Mountains just to name a few. They've lso been featured on the local CBS affiliate WCAX.

Molly and Harrison Lebowitz say, "We're often asked if we are the owners. Actually, the bank is the owner, but they're letting us play here for the next twenty years, or so." 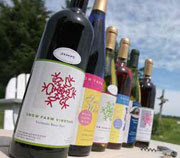 Patrick Barrelet is the winemaker, with a degree in oeneology from the University of Dijon, in Burgundy, France. Assistant winemaker is Abraham Jakobus Burger Badenhorst also has the same degree, but it and he hail from Stellenbosch, South Africa. And Mel is the queen of the tasting room. She runs a friendly and appealing tasting bar.
Vermont’s first commercial grape vineyard has been “aging” nicely for 13 years. The winery is open from 10 a.m. to 5 p.m. for tours and tastings, but it’s best experienced in concert with live music outdoors on Thursday evenings. Weather permitting, Snow Farm brings in popular local acts such as Sandra Wright, Jenni Johnson and the Phil Abair Band to complement the sunset. The area’s spectacular Island Ice Cream is also available. The flavors reflect whatever’s being harvested locally that week.

The '07 Estate Leon Millot has won a Silver Medal at the 2008 Tasters Guild International Wine Competition.

The wine is rich, red, deep, with a touch of oak. A smooth, medium boddied red. Very drinkable. A great table wine beautiful to stand up to any kind of poultry, pork, pasta, or stew. A realy treasure. Easilly one of the best Leon Millot's I've ever had. And it's estate!!!!