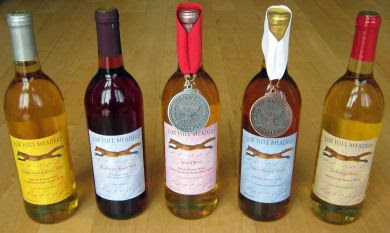 Fox Hill Meadery is located in Western North Carolina. They started production in 2008.
According to a roving reporter, Nicole McConville, of Lark Books, In Ashville, if you are looking for meads with great balance and flavor, you must got to Fox Hill! They are a small, family run business and they pride ourselves on one thing: QUALITY.
"Fox Hill brews five different styles and produces about eight hundred cases per year. The Blackberry Honey Wine (the feds won't accept the name mead if it has fruit) was slightly sweet and was reminiscent of a local Muscadine or straight berry wine. The fruit meads are also called Melomel," wrote Keith Dalbeck, in the magazine The Bold Lief, in May 2009. "The Ginger Apricot was a wakeup call — think kicked up Pad Thai to accompany this sweet spicy cool quaff. Jason's Spiced Mead, infused with cinnamon, allspice and orange peel would be great for a Holiday treat; you could heat it a little on a cold night. Spiced Mead is also known as Methegline, Old Welsh for medicine. It makes sense."
"Fox Hill makes two traditional Meads; the regular is light and semi-sweet but the Special Reserve is the charmer. Most serious beer and wine drinkers would find something to get their teeth into with this dark, chewy, just off-dry sipper made with Pennsylvania buckwheat honey," continued Dalbeck. "All of the others are made with local tulip poplar honey. (If anyone knows a source for local buckwheat honey let Russ know — he prefers to use local honey and helps support efforts to protect the honeybee population)." 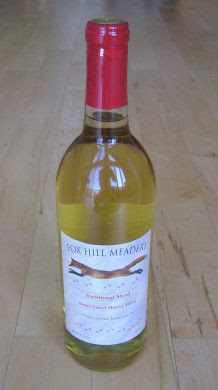 Nicole said the gammut was very, very good. But the clear winner was their classic mead.
Their Traditional Mead is made from multiple honey varieties and is aged with oak. The resulting mead is wonderfully complex! The alcohol content is 13% and the mead is semi-sweet.
They recommend the mead to be served at cellar temperature (around 50 to 60 degrees F). I prefer it slightly colder, like I like all my white wines.
They've won a lot of awards, and I trust Nicole. Enjoy!
Posted by Carlo De Vito at 5:30 AM