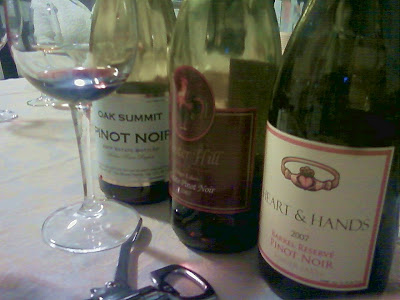 So, we had a New York State Pinot Noir throw down on Sunday night. David Jackson, Sales Director at Hudson-Chatham Winery, and director of Ripertoli Wine Adventures, and is a wine educator, and his wife Kathy had just come back from a trip to the Finger Lakes and then Ashville, North Carolina. And David was crowing about his new find (via Lenndevours) of Heart and Hands Winery’s Pinot Noir. 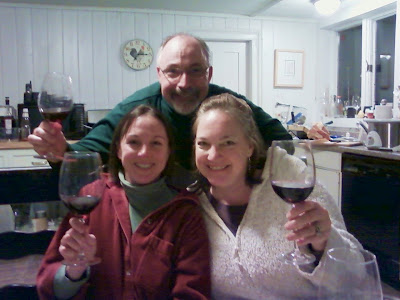 I too had been drawn to a new Pinot, I had been intrigued by, Rooster Hill. Now David and I are avid New York wine fans, as are our respective spouses, Kathy and Dominique. I was curious about his wine, and he was curious about mine. We got together Sunday, and decided to have a tasting – Rooster Hill and Heart and Hands. Kathy made a stew. We had some hearty fresh-baked bread from a local artisanal baker, and off we went.

Now, I must preface this by saying that my two favorite New York state Pinot Noirs are by Jamesport in Long Island and Oak Summit, in the Hudson Valley. So I was eager to see what these two had in store for us. 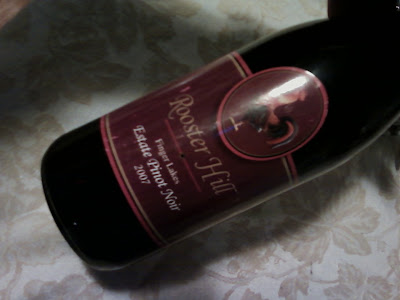 Rooster Hill is owned by Amy and David Hoffman. Their goal is to offer a Tuscan-inspired experience on Lake Keuka in the Finger Lakes. Visitors all seem to love the Tuscan-inspired tasting that affords tremendous views of sloping vineyards and a vista offering the lake’s beauty as well. “Producing wines of character and temperament, where you can distinguish all the most genuine and delicate scents of their land is at the core of our philosophy.” 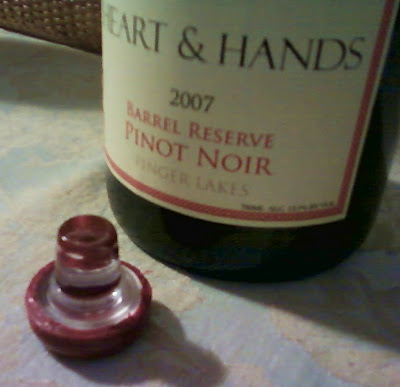 Hearts and Hands is owned by Tom and Susan Higgins. Tom is a graduate of Hazllit 1852 Vineyyards, and Zachy’s Wine & Liquor in NYC. “Heart & Hands Wine Company is located in a serene setting overlooking the eastern shore of Cayuga Lake. We are committed to producing cool-climate wines which authentically express the unique character of the Finger Lakes. Our production is quite small - currently under 800 cases, which allows for an intense focus on quality. Our intent is to produce food-friendly wines, and we offer several wines crafted from Pinot Noir and Riesling grapes for your enjoyment.”

So, both have a commitment to quality and terroir. This was going to be interesting. David texted Lenn about our impromptu showdown, as it were.

We drank the two wines side by side in identical glasses. We decided we would taste before the meal, and then do another tasting during the meal to see how they matched up during the meal with food. 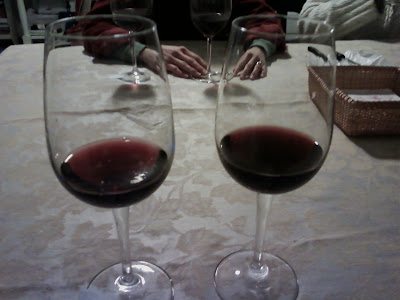 It was apparent right from the beginning that these were two completely different styled Pinot Noirs. Rooster Hill was lighter and more of a dark garnet color, and Heart and Hands was darker, deeper in color.

On the nose, in the beginning, the Rooster Hill 2007 Estate Pinot Noir seemed more obvious or pronounced. Rooster Hill offered deep cherry and strawberry flavors on the nose and tongue. Touches of caramel and coffee were also hinted at as promised. It was a lovely, chewy red wine with expressively soft tannins as advertised. This was an excellent Pinot with tremendous character and a beautiful nose.

The Heart and Hands was a different experience all together. Firstly, rather than the traditional plastic/foil capsule and cork, Heart and Hands’s packaging was incredible. It was sealed in a deep red wax, and there was no cork. Instead, Heart and Hands uses VinoSeal closure which is a glass stopper, ringed in a plastic seal which acts as a sealing gasket. Great packaging! Loved it!

Where the Rooster Hill was estate, the Heart and Hands was not. The Heart & Hands 2007 Barrel Reserve Pinot Noir is made from grapes grown by Sawmill Creek Vineyard on Seneca Lake within New York’s Finger Lakes Viticultural Area. The nose was not immediately apparent when we first opened the bottle and poured the wine. But it did become more pronounced as we let it swirl around in the glass. It was big and deep and dark, deep reds and purples, and I was surprised they had such tremendous color extraction with only 11 days of fermentation. We gave it a little extra time. Then there were aromas of black cherry, blackberry and coffee. It was a much deeper wine. It reminded me of several California Pinots when I smelled it again. David and Kathy and Dominique agreed. Kathy noted that some nutmeg and/or cinnamon flavors were in there. And Dominique agreed.

There is no question, that if you like a Robert Parker, California-styled fruit bomb, Heart Hands is your wine. And I do like those kinds of wines. I would easily put it up against almost anything except a Kistler Pinot Noir or a Clos D’Tart – save that, the Heart and Hands, as a single wine, is a huge, big, beautiful, deep pinot. Wow!

There were 146 cases of Heart in Hands, and the maximum number bottles allowed per person by the winery is six, which if you buy six, come in a wooden case.

The two wines were not indeed comparable. They were totally different, and we all liked them both very much!

But then things got intense. Now the question was, how would the Oak Summit fare against these two wines? Or even the Jamesport? I was about to bring up one of each to the tasting, but the group objected. One would be enough. Thus, being Valley people, bring it on. So up came John Bruno’s Oak Summit 2007 Pinot Noir. 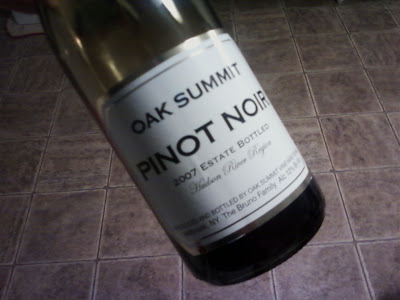 John’s wine was excellent as I had recalled. Stylistically, as a wine it was somewhere between the two other styles. It offered the pronounced strawberry of Rooster Hill and the deeper, darker fruits of the Heart & Hands. Tremendous!

Kathy ladled out the stew, with nice chunks of piping hot beef, slices of orange carrot, and small diced potatoes, along with onion and celery. It has been cooking all day long. The aromas were intoxicating.

We all dug in for a few minutes to cleanse our palates and fill ourselves with sustenance. The bread was dipped in the hit, steaming bowls, and the aromas filled our large country kitchen.

Now came the tasting with food. All three were excellent with the meal. The Rooster Hill and Oak Summit was an excellent accompaniment. They complimented the food beautifully. To me, the Heart & Hands was too big, and was mismatched with the food. I think I would prefer some grilled meat with it. Grilled pork. Even steak. A grilled Portobello mushroom. Tom and Susan suggest beef bourguignon. Mmmmmm.

And of course they all go great with turkey!!!! Especially around the holidays!

Regardless, here is a list of the best Pinot Noirs on the East Coast…and I would put them up against anything….