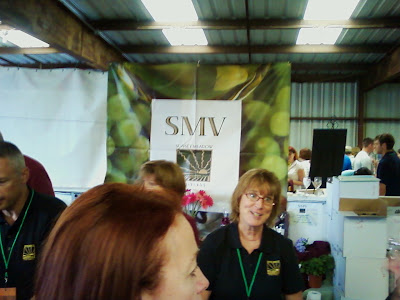 Sunset Meadow Vineyards is located in Goshen, Connecticut. This is a family owned and operated winery, sitting atop the hills of Litchfield. The farm itself is approximately 40 acres. The vineyards are impeccably kept, using sustainable farming methods. The farm has incredible views of Mohawk Mountain and Mt. Tom. 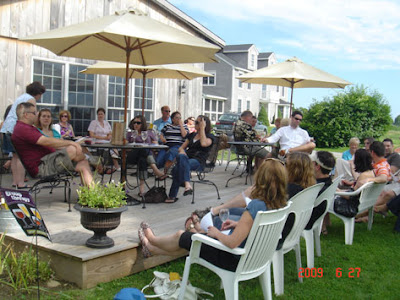 I sampled several wines from Sunset Meadows. The Cayuga White was a surprise, as it was off-dry (or mostly dry), which is not the usual custom with this grape. It produced a very nice, light white wine. I was impressed. But nothing prepared me for my final tasting.

Twisted Red is a proprietary blend of Cabernet Sauvignon, Cabernet Franc, Lemberger, and Chambourcin. It is aged ion French Oak. Hints of blackberry, black cherry, and plum come through as promised. This is a full-bodied, deep, dark, dry red.

Ken Lifshitz (owner/winemaker of Silver Stream Winery in the Hudson Valley) stopped by the other evening, on his way home from a meeting he ha up by us late last Monday night.

Dominique had made a large pot of Spanish rice, but had a large, catered event she had to attend. So the boys and I decided on something rustic. I opened up a can of black beans and can of corn, and I doused the rice with salt, pepper, and some other spices. Then I grilled two large kolbasi, and charred them beautifully.

Ken had brought a gift of watermelon, which the boys were only too eager to cut, especially wanting to each wield a knife that was bigger than both of them.

While Ken had brought a bottle of his Call Me a Cab, I asked him if he was in an adventurous wine mood, and he said he was. I pulled out my recently acquired bottle of SMV Twisted Red.

“Where’s it from? I never heard of them,” asked Ken. I told him, and he lifted his eyebrows. He shrugged. “Hmmm.”

The wine went into the glass, and it was a dark-red, purplish color. It had all the flavors the description had promised. It was a classy, big red wine. Big fruit up front. The acidity was not too overpowering. Soft tannins. Nice, dry finish. And it stood up to my very flavorful meal very, very well. As Ken and I chatted, the wine began to blossom and got better and better. Ken and I both commented on how it really began to improve.

Soon, the sausages and the rice were gone, and so were the boys, after they had slain the giant watermelon (with Ken’s help). That left just us and the bottle, which we soon, happily finished.

Sunset Meadow Vineyards Twisted Red easily steps up as one of the best reds in all of New England. And could compete against many reds from New York and the Middle-Atlantic states as well. It is a wine to find and savor. Decant it for about an hour or so, and you will be incredibly and beautifully rewarded.

Congrats to the folks at Sunset Meadows Vineyards.
Posted by Carlo De Vito at 3:39 AM