Lenndevours at It Again - Reviews Raphael Malbec for Appellation America 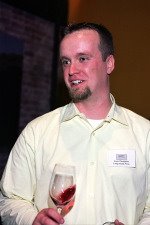 Lenn Thompson at Lenndevours is, as you already know, one of my favorite bloggers. Read his most recent review of Raphael 2004 Malbec (North Fork of Long Island). Dom and I are big Raphael fans. Enjoy!And thanks Lenn!

Yes, there is Malbec growing on Long Island -- and probably more than you realize.

Once a major component in the wines of Bordeaux, this large, fairly easy-to-ripen black grape is now best known in Argentina, where it is most often bottled alone. It’s also a big player (along with Cabernet Sauvignon, Cabernet Franc, Merlot and Petit Verdot) in Meritage and other blended red wines in the US, Australia and South Africa.

So it only makes sense that many of Long Island's Meritage-style reds feature small amounts of Malbec -- typically from 1 - 7%. However, it's rare to see a varietal bottling that is all -- or mostly -- Malbec. But, in a game of vino role reversal, this bottling from Raphael is 95% Malbec with just a little (5%) Merlot blended in.

Winemaker Richard Olsen-Harbich describes the 2004 vintage as a "return to normal growing conditions" on the North Fork. The summer was rather dry, but somewhat cool, which makes it somewhat "similar to the wines made in 2000." This is the second time that Raphael has bottled a Malbec and it's only available through the Raphael Reserve Club, their wine club. Only 75 cases were made.

Read the rest at: http://wine.appellationamerica.com/wine-reviews/930/Raphael-2004-Malbec.html
Posted by Carlo De Vito at 9:20 AM 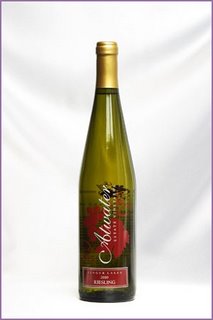 “The Challenge is now a truly international competition with over 100 wines from Europe and a growing number from North America,” said Chairman of Judges, Louisa Rose from Yalumba. “The gold and trophy winning wines are truly world class. Their makers should be very proud of their achievement.”

Congrats to the folks at Atwater and the Finger Lakes.
Posted by Carlo De Vito at 9:15 AM

Four JG's Orchards & Vineyards will be open for the Holiday Season every Saturday & Sunday from 12pm-5pm beginning October 28th thru Saturday, December 23, 2006. You can also fins their wines at:

Four JG’s Orchards and Vineyards of Colts Neck, New Jersey, has earned two medals at the prestigious Los Angeles County Fair, 2006 Wines of the World Competition. A Silver medal was awarded to their already-titled Chambourcin Riserva, and a bronze medal was awarded to their newly released 2004 Cayuga White. The 67th annual wine competition held in Pomona, California on May 17-19, 2006. Thousands of wines from all over the world compete for these coveted awards. The award winning wines grown from grapes harvested at Four JG’s Orchards & Vineyards will be on display at the Los Angeles County Fair, September 8 through October 1, 2006, along with other international winners. The Wines of the World, LA County Fair Wine Competition, is one of the nation’s most elite consumer-focused wine educational forums and competitions.

It was a beautiful day today. The sun was shining brightly, and the sky was blue. We have a large veranda on our circa 1880 white Victorian house. I recently had it painted. It looked marvelous. The white glossy finish sparkled. White trim and railings, and the floor gleamed. I had taken all the white wicker furniture, a dozen years, and fourteen separate pieces, and acrubbed and sprayed it all.

On Sunday, we reassembled the entire front porch. We unblocked the stairs, and put the shining white furniture around, and I put up a brand new white Victorian mailbox. There was an intense sense of accomplishment and success, even for something so simple.

With the boys in tow, we went off to visit Target and then Wegman’s to celebrate in the most suburban way possible - we shopped. Dominique bought a chicken, some butternut squash and some green beans and a great big loaf of fresh sourdough bread. We came home and the smell of the chicken invaded the house even as the boys and I practiced button-hook and post routes, myself throwing the football like Eli Manning. As the sun touched the tops of the trees with gold, we decided to call it quits. We went in and decided to watch It’s The Great Pumpkin Charlie Brown. It was almost impossible as the chicken’s golden brown scent wafted through the house as Vince Garaldi’s melodies provided the score for my salivations.

When Dominique finally called us, me and my two sons would have gladly chewed on a piece of pine. White or red, Dominique and I questioned each other. Finally, after searching, I found a bottle of Turis 2003 Chardonnay. Aged in oak for six months, this chardonnay is clean and smooth, with just the right touch of vanilla and oak. An exquisite fresh wine.

We toasted, and I took my first bites, I savored each like I was in a French café. The skin was a crispy golden brown and the mashed butternut squash and fresh string beans were exquisite. And the white wine was good and cold and delicious.

Congratulations to Sal and Sara Turdo at Turdo Vineyards, and here’s to an exquisite simple elegant wine.
Posted by Carlo De Vito at 7:38 PM

The Vineyard at Strawberry Hill

The Vineyard at Strawberry Hill was not covered in my book, because I discovered it too late in the publishing process. I would like to correct that right now.

Robert Summer is a music industry executive who has been president of RCA Records and Sony Music International. He and his wife Susan Summer have been collecting fine art since before the 1980s.

"It was a time when everyone was collecting American art, and we looked at our collection and felt that what we really enjoyed were the young artists from Glasgow, so we thought going forward we would do a collection of figurative art" from British painters, Mrs. Summer told Alistair Highet in the September 2003 issue of Preview Connecticut.

Mrs. Summers told Highet that the young painters being featured in a particular exhibit "knew how to put paint to canvas, and of course the prices were a minor amount when compared to what they were asking in the states at the time." According to Highet, “The Summers' collection -- Stephen Campbell, Peter Howson, Adrien Wieszniewski among them -- then inspired a more ambitious idea. In the 1990s, the couple ran a kind of artists' residency program out of an old mill building in Bantam, where they invited young British artists to come and paint for a year, all expenses paid. The open studio events during those years were some of the most exciting art events in Connecticut, and many of those painters have gone on to prominent careers.”

These are the people who own The Vineyard at Strawberry Ridge, possibly one of the most beautiful vineyards in New England, along with Greenvale and Sakonnet, and that is saying something. In September of 2004, The Vineyard at Strawberry Ridge was recognized as a "Favorite Find" in the fall 2004 issue of Town & Country Travel Magazine. It’s that beautiful.

The Vineyard at Strawberry Ridge is located on 22 acres of hilly terrain overlooking Lake Waramaug in northwestern Connecticut. They’ve been making it for approximately 10 or more years. The crush, barrel aging and bottling, is performed under our supervision at a modern off premise facility in North Stonington, Connecticut.

The Chardonnay has been their signature wine. It is a small quantity production that has found excellent placement among restaurants around the New York City metropolitan area and beyond. They have recently released a 100% cabernet sauvignon. Both are dry and classic, as the Summer’s prefer classic wines.

According to their website, “In a first for Connecticut wine, Ascot Reserve has penetrated the international market and can now be found on the wine list at the new Wynn Resort in Macau.”


Their wines can be bought at Zachy’s, as well as ordered in these fine restaurants: 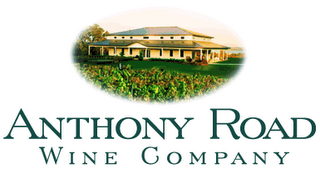 It is a deep gold viscous dessert wine made from their vignoles grape. Anthony Road claims, "It is naturally balanced in sugar and acid so that thefruit characters are carried through the long finish." And I would have to agree.

I came home dog tired tonite, and Dominique asked if I wanted a glass of wine before we went to bed. I didn't want a light white, nor a deep one, and I wasn't interested in a red. But a dessert wine sounded just right.

The 2004 Sweet Dream took Double Gold at the International Eastern in May this year, and a Bronze medal earlier in April at the Golden Nose. In August the 2005 Sweet Dream took a Silver medal at the 2006 New York Wine & Food Classic.

Dominique picked a bottle from the fridge and opened it up. We like our dessert wines cold. And she brought two glasses up to bed, while we discussed the day and happily sipped the golden ambrosia. Not too sweet. Very tastey. And a great nite cap.

So I came home this evening and my wife, Dominique, had made a winter brothy stew, made of collard greens, wild rice, and grilled sausages. I looked at her quizzically. What kind of soup was that? I asked. It sounded strange, but indeed, in one of the first cool nights of fall here in New Jersey, it smelled good.

But what to drink with it? A chardonnay? A vidal blanc? a Sauvignon blanc? I searched the fridge for something interesting that might stand up to this clear broth stew. To my own surprise I went with a Haight Vineyard Covertside White.

More than two decades ago, Haight Vineyard was among the first to plant Chardonnay and Riesling near the historic Town of Litchfield, Connecticut. In 1978, the State Legislature passed a Farm Winery Act. Haight Vineyard became the first established winery. Haight now has two tasting rooms - one in Litchfield and one in Mystic.

I first discovered Haight Vineyrd when it was only Hopkins Vineyards, Haight Vineyard, and DiGrazia Vineyards in Connecticut. This was in the early eighties. It was among the first eastcoast wineries I ever visited. But it's been a while since I was last there.

To find this bottle of Covertside White was a special surprise. It's a light Seyval Blanc, that has just the slightest touch of sweetness, which comes across like a little bit of sour apple. This is not a sweet wine to the taste. Promise. Instead, it's puckerish, dryish white. We sipped it, and it tasted wonderful. Then came he moment of truth. What would this brothy concoction taste like?

I asked her, "Why not white cheddar maccaroni and cheese and sausage?"
"Because," she said, "That would be fattening."
And of course, she was right. And the soupy stew was wonderful.

And the Haight Vineyard was a delicious compliment to this steamy bowl of soup. And as if I didn't already know, it could stand up to many more wonderful winter meals. Here's one winter white worth serving.
Posted by Carlo De Vito at 6:02 PM